Expansive Poetics – (“A Slap In The Face of Public Taste”) 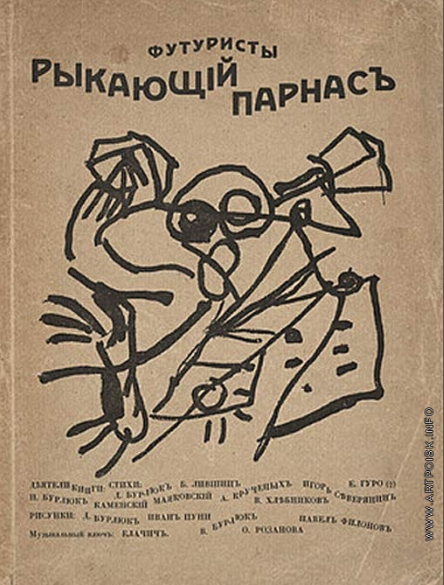 AG: So what was lost, or what was the energy that’s lost, it’ll be interesting to read, going back eight years earlier (from 1920) (to) the (Russian) Futurist Manifesto. I think that was the last thing  (or one of the last things) I read in the last term’s class. Let’s see if I can find it.

Student: Yes, that was the last thing.

AG: Let me see if I can get it. It was called “A Slap In The Face of Public Taste”

AG: “Full of piss and vinegar”!  Let’s see where I had it. Wait a minute.. let’s see. .where did I put it?  – Give me a minute to find it and check it out. It’s in this big book on Futurism.. [Allen keeps searching] –  Yeah, that (that manifesto) was issued in Moscow, in December 1912, signed by (Vladimir) Mayakovsky, (Velimir) Khlebnikov – and by David Burliuk (who was a great painter, who was smart, and got out of Russia around 1920 and went to the United States, and lived out on Long Island, where, at one point or another, in the (19)30’s or (19)40’s, he ran into Peter Orlovsky’s mother! (and hung around in America with Raphael Soyer) –  Alexander Kruchenykh also signed it.

So this is typical of the Futurist, Dadaist, Surrealist manifestos of that era. What I was going to do was to read that and then compare that with the Dadaist manifestos (of) around the same time, written in Zurich by Tristan Tzara

A SLAP IN THE FACE OF PUBLIC TASTE

To those who read our first new unexpected.

We alone are the face of our time. The horn of time blows through us and the art of words.

The past constricts, the Academy and Pushkin are less intelligible than hieroglyphics

But who will be so gullible as to turn his last love to the perfumed lechery of  a Balmont?
[Editorial note – Balmont was a Romantic Symbolist of the time]

Will he find a reflection of today’s virile soul there?

Who will be so cowardly not to dare to tear the paper armor from warrior Bryusov‘s black tuxedo? Will he find the dawn of an unknown beauty there?

From the height of skyscrapers we look at their insignificance.

We decree that the following rights of poets be respected:

1)  To enlarge the scope of the poet’s vocabulary with arbitrary and derivative words.

2) To feel insuperable hatred for the language that existed before them.

AG: “bathhouse switches”? – I guess for…

4) To stand on the rock of the word “we”amid a sea of cat-calls and outrage from the bourgeoisie.

And if for the time being the filthy marks of your common sense and good taste remain in our lines, nevertheless, for the first time, the lightning flashes of the new future beauty of the self-sufficient world are already on them.