Last weekend we featured a couple of William Burroughs‘ rock collaborations. Here’s a few more, starting with his rendition of a poem by Jim Morrison (from the tribute album, Stoned Immaculate – The Music of The Doors) – “Is Anybody In?”

Turning the heat up (more than) a little, there’s his collaboration with Ministry on what is now a bona-fide “heavy-metal” classic – “Just One Fix”(The more immediate, more palatable, more obvious Ministry-Burroughs collab, A Quick Fix – can be heard here – or here” 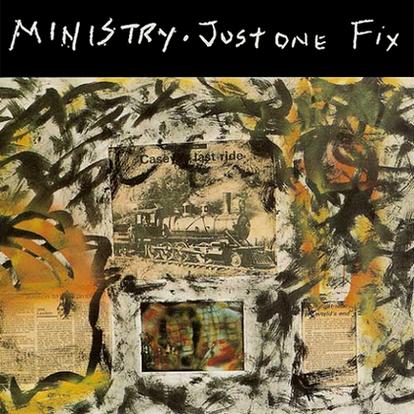 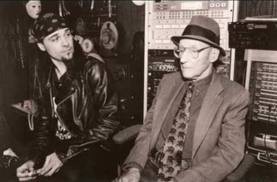 Sun’s Going Down. Like a big bald head/Disappearing behind the boulevard. (Oooee). It’s Sharkey’s night/Yeah. It’s Sharkey’s night tonight. And the manager says: “Sharkey?/ He’s not at his desk right now (oh yeah). Could I take a message?”/ And Sharkey says: “Hey kemosabe! Long time no see”/ He says: “Hey sport. You connect the dots. You pick up the pieces”/ He says; “You know, I can see two tiny pictures of myself/ And there’s one in each of your eyes. And they’re doin’ everything I do/ Every time I light a cigarette, they light up theirs./ I take a drink and I look in and they’re drinkin’ too./ It’s drivin’ me crazy. It’s drivin’ me nuts”./ And Sharkey says: “Deep in the heart of darkest America/ Home of the brave. He says: “Listen to my heart beat”,/ Paging Mr Sharkey. What courtesy telephone please.”