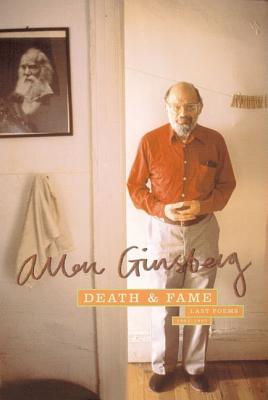 Allen Ginsberg, Bob Rosenthal, James Grauerholz, Michael McClure, Peter Orlovsky – from Colin Still’s No More To Say And Nothing To Weep For – An Elegy For Allen Ginsberg 1926-1997 (1997)

We lost Allen (Ginsberg), but believe me, he died very well – extremely well. We would be very lucky to go like he did. He was absolutely ready. It is interesting. It looked like he was always thinking that he had another ten years to live. Last year, after the summer retreat, I told Allen that when someone is getting sick and they are told that they are going to die, then it is very difficult to talk to them about it. So it is very important to talk to people about death when they are well. You never know when you are going to go. You may have plans to live for another ten years, but you should always be prepared to go. Allen said that he was always scared of dying. He said, “If somebody told me that I was going to die now, I don’t know how I would take it.” We talked about all his practices and I was then able to share with him the Uncommon Inconceivable Practice of Vajrayogini. Normally you are not supposed to give that practice to people before they have done a retreat. But then for Allen to do a retreat at this point would have been extremely difficult, so somehow I made an exception, seeking the permission of the lama and the yidam. Allen did spend quite a lot of time doing that practice. I tried to work out a very simple practice for him to do and he always had his hand-written notes with him and he tried to read through this practice daily.

When he finally got the news that he was terminally ill, he took it very well – better than me! It took me two days to come to terms with it. I was in Mexico when I got the news from him. It sort of spoiled my holiday – but he was very excited, thinking that now the time had come. And as things started to function, his life started to become something like a celebration. The directions he was giving to his staff and his closer friends pointed in that direction. He was very excited and started to call everybody, telling them that “Look, I have incurable cancer and I am going to go now!”

From that day on, for a week he was very excited and quickly made all the arrangements that he wanted to make and although he accepted that he was going to die and would not continue, he knew that he still had a lot of unpublished manuscripts of his poetry and there would have been something like six more years to work on all of that and he now gave instructions what to do with all this material. He also had tremendous numbers of photographs and gave instructions what to do with these and then finally he was ready. Suddenly he then had a little stroke and congestive heart failure. That was good. Congestive heart failure is the best way to go, because you don’t have any pain, you just fill up with water and that is it. Kyabje Trijang Rinpoche always said that we all wish to go easily and the easiest way was by maintaining the water in the body.And that’s what Allen had. If you think about it, it was only that Friday that he was in a semi-coma and Saturday morning at two thirty-nine a.m the death process started. We reached his place on Friday afternoon at about five p.m. and when we walked into his room there were so many people! Some people were drinking tea, some were eating, there was food on the table and people were coming and going and all these very famous people were there. It was really like a celebration. Nobody was crying, but they just went up to him and looked at him and then went back and talked to each other. Some people were reading. His cousin, who is a doctor, (Joel Gaidemak) was there too. At first he forgot his stethoscope, so he had to go down and get it, so that everybody knew that he was the doctor. Then he explained to everybody what was happening to Allen and what happened before and why and what was going to happen next. When there were no more questions, he went on to explain what the latest books were saying about that condition. It was very interesting. Allen had a very open life and in the same way, a very open death too. Everybody was there, going in and out – sort of a celebration, really.
From our point of view, the first thing we did when we arrived was to do the Lama Chöpa. We did it very slowly and by the end of the practice I thought he was very close to going. but after twelve p.m (midnight) we took a break and went to sleep until at two forty-five a.m. Kathy woke me up and we went back in and by three a.m he was obviously in the dissolution process and we did Vajrayogini self initiation. By about seven a.m to seven-thirty a.m. there were only few people there. It was very funny. When good opportunities come, there are never many people around. It was the perfect timing. I did the Vajrayogini initiation for Allen and we also did the five-deity Chakrasamvara self-initiation, and by eleven thirty a.m, it was clear that his consciousness had left the body.

Normally, when the consciousness leaves the body, there are signs, like water leaves the body. In the case of Gelong-la, who died in the retreat [Editorial note – the monk Gelong-la died at the Jewel Heart Winter Retreat in 1995, Allen (and Philip Glass) were in attendance], he had blood coming out of the nostrils. Ken [sic] was saying later that he had seen blood on the pillowcase. At the time, I just said that the blood must be from a cut to his head when he had shaved it. But in Allen’s case there was no blood coming from the nostrils and because there were many people around I could not look at his lower parts, which was even more difficult because they had put diapers on him. It would not have looked good to all these people. Before eleven thirty, his head was still upright on the pillow and after eleven thirty,it was down completely. That is a clear sign. Immediately after that, his temples became hollow and his coma Afterwards, all these people came and talked to me and they had all these different theories about why Allen had died. One of his cousins said it was because he worried so much about Peter Orlovsky. Another person had the idea that with our prayers we were pushing Allen out of the life. That’s why I thought I better explain a little bit what happened. There is no question that Allen was concentrating on the Mahamudra and Vajrayogini and that is how he went. It was a very successful death. Of course, to us it is a great loss, no question about that, not just for us, but for society as a whole. However, for him, he began his own celebration and it really was a celebration. And I probably should not say that we are very happy, but on the other hand, we all have to die and you could not have a better death than that. We all wish to continue but we cannot. I said to Allen when he gave me the news, “We always think we could go on for some more years, but look at your life, you are seventy years old and have made a tremendous contribution.” Aura (Glaser) keeps telling me it was a five lifetimes contribution. I told Allen, “I don’t think that in the (19)60s you thought you were going to live that long.” And he said, “No, definitely not. If I had thought so, I would have taken care of myself a little better.” Then I said, “You are seventy now and although it is not a very long life, like one-hundred-and-fifteen or so, it is also not a short life either. So it is okay.”
In his last days, he called a lot of people and said good-bye to them.He definitely called Philip (Glass) on Sunday, thanking him and saying good-bye. Actually, Philip did not see him after that. Later, Allen rang me and said, “Rinpoche, I wrote my own funeral poem, it looks quite good, shall I read it to you?” But I did not want him to read it. Philip was there with me, so Allen talked to him and said, “You listen to this!” and then he read his poem to him and of course it is his “Gone, Gone, Gone” poem. At the funeral it was supposed to be read out, but nobody knew it, except Philip. Luckily, he had listened to Allen and remembered it. So he recited it at the funeral. Everybody respected him, he was very open and nice and made a tremendous contribution to society. So we should remember Allen in that way. That is my suggestion.Gone Gone Gone 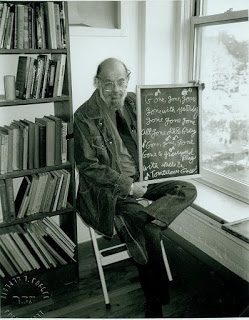