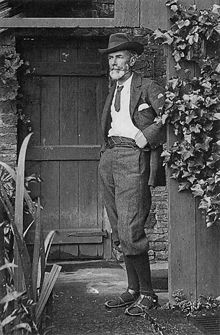 AG: And Whitman had a few rare students who actually made it as poets, using his style and using his amplitude of vision or inclusion – his amplitude of ambition, let us say – to include everything. There’s one really remarkable writer, Edward Carpenter. We have some of his work in the precursors (section), actually, (of the Expansive Poetics anthology). [see also Allen’s earlier discussion of Carpenter here, here and here]

This here [Allen displays book] is a copy of Edward Carpenter’s book of poems in four volumes, called Towards Democracy, an odd edition that was published in… I got in 1966. Vietnam War Peace March Day, purchased from the Gotham Book Mart, a month or so after hearing “The Secret of Time and Satan” read aloud by Gavin Arthur in San Francisco

The book is an odd.. it has no opening title pages (except in Volume 1). We can look at it. It’s an odd little shot. You might pass it around. Take a look at the title page, because it’s rare. I don’t know if it’s available any more. I’ll have it on reserve in the library – London, T.Fisher/Unwin, Paternoster Square, 19..? – what is that? can you read that?

Student: Yes, it is

AG: Ah-ha, so this is an 1892 edition of Towards Democracy (third edition, enlarged). I’ll pass the volume around. Let’s see if I’ve got the right one here. The one.. did I pass the wrong one that way? I…

Student: What are you looking for?

AG: Page.. oh, I got it. It’s alright. Yeah, you can pass these around [Allen hands around xeroxes of a couple of Carpenter’s poems] so you can see it.
In the “precursors”, you’ll find two specemins of poetic writing by Carpenter. C.C. [Allen’s teaching assistant]  reminded me that he (Carpenter) wrote an excellent biography of Whitman

AG: Have you read it?

AG: Where did you run into it?

AG: (In the anthology) it’s just before (Arthur) Rimbaud, the heroic “precursors”, the first section of the book (I put mostly material published before 1900 in that precursors section).  There’s a poem, “From Turin to Paris”..