March 11, 2014February 6, 2020admin
I would say he (Jack Kerouac)  offered his heart to the United States and the United States rejected his heart. And he realized what suffering the United States was in for, and so the tragedy of America, as (Walt) Whitman had seen the tragedy of the United States. “When the singer of the nation finds that the nation has sickened, what happens to the singer of the nation?” This is Gregory Corso‘s question.   And America, by his day, was sick. Militarily sick. Military-Industrial-Complex had taken over. Hard-heartedness had taken over. Everything that as a Canuck-peasant Kerouac hated had taken over – the mechanization, the impersonality, the homogenization, the money-grabbing, the disrespect for person – that had all taken over. And vast wars – and the attack on the provincial in the wars.    So I would say America broke his heart.”

and more Ginsberg-on-Kerouac
– on his infamous appearance, in 1968, on William Buckley’s “Firing Line”  (from the Malcolm Hart, Lewis Macadams, Richard Lerner, 1986 documentary,  “What Happened to Kerouac?” (DVD extras) )

Here’s the programme in question

AG: “So the question is what happened when William Buckley invited Jack Kerouac to “Firing Line”, his program, 1968, late. (William) Burroughs had just come back from Chicago (1968) tear-gas Convention and was staying, at the expense of Esquire magazine, to write an article, in some uptown hotel on the East Side, and Jack came down from Lowell with his brothers in laws ..maybe Mike and Tony Sampas, or a couple of his friends, or brothers-in-law from the Greek family of his wife, and he was drinking, and he was in a sports shirt and sports jacket and kind of like blue-collar-looking pants, (and) I think he had a little hunting cap or something like that, and his big guys who were with him who were trying to keep him from drinking, but taking care of him, were very gentle and very friendly, and curious to see – “this is Burroughs?, this is Ginsberg?” – and friendly, and, sort of.. Kerouac was, as ever, being absent-minded, funny, insulting, cheerful, dear, tippling (carrying his bottle, talking about his bottle) had a hip flask. 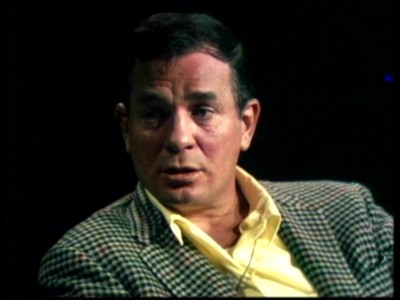 Jack thought he was going to have this big intelligent conversation with Buckley. We got there, came down in a cab or something, (and) who do we meet on the sidewalk but Ed Sanders? What’s Ed doing there? Ed’s supposed to be on the show. So we went up the elevator with Ed, and Kerouac said, “I don’t know you. Why are you on this show? Why are they putting hippy beatniks on this show?”, and Ed said, “But Jack, I’m your.. you’re responsible for me! I came out of your On The Road, or, I came out of your art. I’m your child, or, I’m your second generation. You’re my father”. And Jack was being really sort of ugly drunk disgruntled. Normally when I went on the program, I went on one-to-one with Buckley and someone of Jack’s stature, I would have imagined, would have gone on one-to-one. Instead, he was set up on a panel with the young beatnik Ed Sanders and some guy who’s a professor of sociology who’s going to sit and…examine him as a specimen or somethin’.

(Because) he realized that, in some way or other, he was set up – to be the object of discussion, rather than a grown-up discusser. Because it really was.. You know, I don’t see how it could have arrived at that situation where he didn’t know that he was.. where… where he was set up not to be alone, one-to-one, but set up, as sort of an object, on a panel.

His agent should have been out there with a limousine or his assistant bringing him in and explaining the situation and smoothing it away, saying “Mr Kerouac will not appear if he does not get the twenty minutes he was invited to do, because he is the central person and has prepared a statement – and, don’t do this” –  or, he himself could have handled it that way – but he didn’t. So he acquiesced in the situation, out of some kind of confusion and also basic kindness – he didn’t want to make trouble. So I remember Buckley asking him, very interestedly, ” And what do you think about the Vietnam War?”, hoping that Kerouac would make some either left-wing diatribe or some right-wing denunciation of the lefties, and instead Kerouac gave this magnificent answer, which floored Buckley, which was – “Ah, all them South Vietnamese wanna do is get hold of our jeeps!” – (which is something like “all these welfare-chissellers wanna do is get hold of our tax-payer’s money!”) – and of course Buckley could have no answer!– because it was accurate, because it really was that corrupt South Vietnamese military Catholic elite, you know, corrupt and getting.. making money off the war. So it was really a brilliant and incisive, very funny, answer.

But.. Kerouac wasn’t really paying attention, he wouldn’t relate to Sanders (though Sanders on the screen said, I think you’re good, you’re my father) and he wouldn’t relate to the sociologist (Lewis Yablonsky) (who was kind of dumb, I think, who was just applying non-esthetic, non-art standards to an artist and didn’t understand art, thought Kerouac was a social phenomena rather than an artist – and (who?) mispronounced his name a number of times – (and) the guy got upset, thinking that he was being anti-Semitic, (which Jack was – but sort of rightfully, because he was being attacked constantly by all the New York Jewish intellectuals who did have a vendetta against him – beginning with a guy named Bernstein, (Theodore M Bernstein), an editor at the New York Times who hated Kerouac, according to family gossip brought to us by Ernest Von Hartz, a co-editor on the New York Times, (& the father-in-law to Lucien Carr) who said that Bernstein was so afraid and scared of Kerouac that he did everything he could to smutch his name in the New York Times – that should be known, that’s (not only) a little footnote – or to leave him sort of prey to attack if anybody wanted to attack him.

And Kerouac was so uncooperative, and at times spaced-out, it seemed to Buckley, that Buckley asked me to step in and replace him for this “sociological discussion of the Beat Generation”.. (Any Beatnik will do?) – Yes, so I just said I was some distinguished Beatnik or other..one of two drunks, try this one..So Buckley I think got upset, because Kerouac was no inconsiderable figure, and Kerouac had spoken nicely to Buckley, and Buckley had invited him in, and here was this great hunk of drunken meat, making witty remarks (and completely irreverent remarks), like destroying the format, by being completely honest and clear. It wasn’t a disaster at all with Kerouac, who was drunk,but one hundred percent frank and one hundred percent real, It was one of the realest programs I ever saw. So I said, naturally, “No, no no no, I didn’t get into this… I wouldn’t dare, you know, replace Kerouac, it would be like a lese majeste

[Allen then reads out Buckley’s letter to him, from 1981, in response to an invitation to join him at the 25-Years Celebration of On The Road – the 1981 Naropa Institute Kerouac Conference]

Dear Allen, Thanks for the invitation. Kerouac was a very special guy, awfully difficult, and I am pleased that somebody is paying such dramatic attention to him, but I should not be included in that number because I am not sufficiently a student. He was very kind to me in several public references and I attempted to be kind in return but I did not take seriously his philosophical odyssey. With warm personal regards, Bill.

Very nice letter  – very literate (which is what Kerouac liked about him, that he was literate). But.. Kerouac also liked..McCarthy..Joe McCarthy, oh yeah, loved McCarthy ..because McCarthy would get up there drunk and, you know, talk funny – he (Kerouac) said, he thought McCarthy was the only honest man in the Senate, (in the sense of someone talks from the top of his mind and says outrageous things, while everybody else is trying to keep it..  everything fine under the cover)(In that sense) McCarthy was a hypocrite.

From someone with a sort of anti-artist point of view it (Kerouac’s “Firing Line” appearance) might have seemed like a disaster, but, actually, as time goes on, Kerouac will look more and more interesting and Buckley will look..the occasion, the necessity to be polite on the occasion and the necessityto be rationally coherent and linear on the occasion will fade and the monumentality of Kerouac’s drunken humor will emerge as a kind of tragic-comic Rabelaisian beauty, and his remarks will get clearer (as he was really shrewd, drunken-shrewd – he was very good when he was drunk, he was never at loss for trenchant lines of beauty in poetry).

Jack Kerouac and Allen Ginsberg in 1959 – Photo by John Cohen 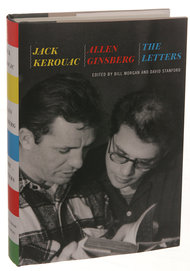 Allen Ginsberg-Jack Kerouac Letters, in case you haven’t read it yet, is essential reading

AG: “Jean (Jack), you are an American more completely than I, more fully a child of nature and all that is the grace of the earth….To categorize according to your own terms, though intermixed you [and Lucien Carr] are romantic visionaries. Introspective, yes, and eclectic, yes. I am neither romantic nor a visionary [this is 1945 (sic)] and that is my weakness and perhaps my power, at any rate, it is one difference. In less romantic and visionary terms, I am a Jew (with powers of introspection and eclecticism attendant perhaps.) But I am alien to your natural grace, to the spirit which you would know as a participator in America…I am not a cosmic exile such as (Thomas) Wolfe or yourself for I am an exile from myself as well. I respond to my home, my society, as you do, with ennui and enervation. You cry “oh to be in some far city and feel the smothering pain of the unrecognized ego!” (Do you remember? we were self ultimate once.) But I do not wish to escape to myself, I wish to escape from myself. I wish to obliterate my consciousness and my knowledge of independent existence…”