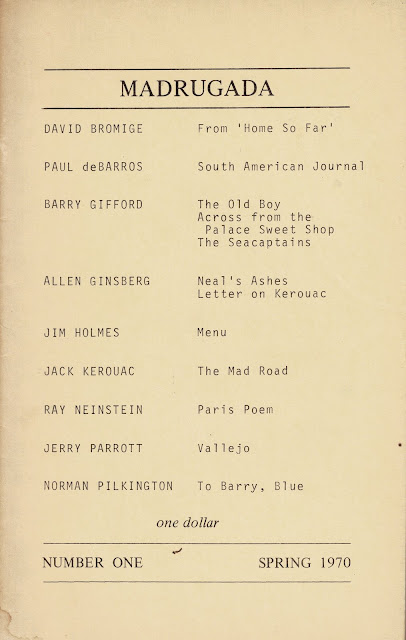 This week (Wednesday) is Jack Kerouac’s birthday. As a warm-up, we present today, a little fugitive item – Allen’s “Letter on Kerouac”. It appeared in the inaugeral (Spring 1970) issue of the magazine Madrugada

Dear Barry (Gifford) – Thanks for your kind letter made sense – Someone mentioned reading Desolation Angels (not in paperback yet!) [editorial note – it is now!] and I’ve been thinking about (The) Dharma Bums – those two plus Lonesome Traveller come into focus this decade (the 1970’s) as Gary Snyder also comes into focus.
Put all the books side by side and perhaps Vanity of Kerouac (Duluoz) has a kind of proper proportion and sweet wit about it.
I am so appalled by the effort at sticking to writing that I am amazed how much Kerouac has written and how complete it actually is. Big Sur is a powerful and detailed record of physical illness and paranoia as well as Nature and City Scene & Poets etc. Even (F.) Scott Fitzgerald for all his honor & genius & pride & Literary Placement couldn’t complete his own Crack Up as Kerouac so energetically did.
This morning I woke up 6 AM & over breakfast read Thomas Wolfe‘s description of Train Engine pulling into station – (Of) Time and the River – that kind of poesy both neolithic-futuristic visionary power stile [sic]. Guard your Gleam with humour – Best luck – Allen
P.S. I made an early vow – 1956? 1950? – any political or revolutionary situation wherein I’d find myself enemy of Kerouac or people on my side saying “up against the wall Kerouac” I’d know I and the world were mad.
Can’t kill lambs. Even that Kerouac’s not a lamb as he gnashingly repeats’s no excuse to create more horror scenes worse than he already imagined
& there’s late Dostoevsky and Celine and Pound too. Even though Kerouac’s a shit and a mean lush. Still Stella (Sampas) keeps the literary feedback from electrifying him to Boredom death.

Barry Gifford, the recipient of this note, is, of course, the respected poet, novelist and screenwriter, (and author, (along with Lawrence Lee), of the invaluable oral history, Jack’s Book, in which Allen (necessarily) features as a prominent and illuminating contributor). 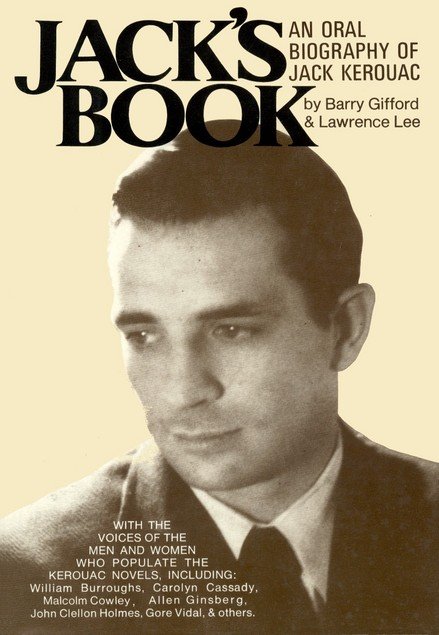 from David Wills‘ 2007 interview with Gifford, in Beatdom

DW: How willing were Kerouac’s friends and associates to be interviewed for the Oral Biography?
BG: Everyone we found was willing to be interviewed. Only two asked for money. Gary Snyder and Gregory Corso. Instead of paying Corso, a friend of mine agreed to substitute his own piss for a urine sample of Gregory’s so that Gregory could get his methadone in Paris!”
…
DW: … finally, could you describe your friendship with Allen Ginsberg?

BG: I first met Allen in 1966 in London. I remained friendly with him until the day he died. He published a book of poems, Sad Dust Glories, with a small press I edited with another guy (Gary Wilkie), and, of course, I edited the book, As Ever – The Collected Correspondence of Neal Cassady and Allen Ginsberg, working on it with Allen. He was always very generous and affectionate with me, as he was with almost everybody”.

“My god, it’s just like Rashomon – everybody lies and the truth comes out” (Allen’s observation on Jack’s Book) – Jack Goodstein‘s review of the book may be read here