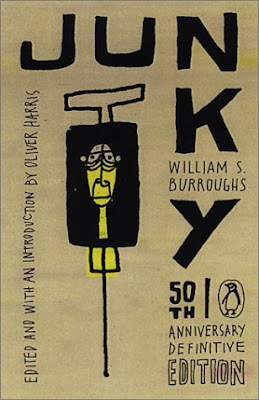 Junky – cover for the Penguin “50th Anniversary Definitive Edition”(2003), edited with an introduction by Oliver Harris, and a Foreward by Allen Ginsberg

WSB: ..but I really don’t think that there’s all that much continuity in human experience and, looking back on what I was, say, twenty years ago, or thirty years ago, I think.. I wonder, well, “who was that? why was he doing that?” and I don’t have the answer

PG: You don’t have the answer?

WSB: I don’t have the answer at all, no

WSB: I majored in English literature at Harvard and then I took some graduate work in anthropology

PG: But you don’t know what within you or your background lead you to literature?

WSB: Well, it was the easy major!

PG: The university’s out right now. I think I hear a little applause there.

WSB: For..well..but.. six hours, I could prepare for any exam

PG: No ambition at that time to be the kind of writer you became, to be a novelist, to join…?

WSB: I wasn’t really interested in writing at that time. I attempted to, you know, follow the usual lines of advertising agencies (and) I tried to get into the precursor of the CIA, but that was Bill Donovan.. I forget what they called it..

WSB: Yes, I was turned down. So I was sort of a WASP wash-out!

PG: Then what moved you from there into the Beat movement?, because you and Jack.. the three persons..

PG: The three principal names were Jack Kerouac, Allen Ginsberg, and yours…

WSB: Well, yes, but remember the Beat movement didn;t exist at that time.

PG: No, it was invented after it existed, kind of?

PG: What moved you that way? You say there’s no sense of continuity but there must have been a change?

WSB: Well, after, I guess it was 1950, and I’d had these experiences as an addict, I was living in Mexico City, and someone suggested to me that I simply write up my experiences with heroin addiction, which I did, and that was the book, first book, Junky.
And then, when that was published, that was when I was encouraged to go on writing.  go on with writing .. but I was thirty-five at the time

PG: Even though you say in the book, where you say quite clearly that it’s it’s not a useful question, I want to ask it, what ..what led you to junk, what..?

WSB: Er..you see.. well, I was around people that were using it. Then I started on taking an occasional shot, and it is for most people, I think, a very pleasurable sensation, It’s like what leads people to alcohol, or any other drug, They take it and they like it and they take some more.

WSB: You see, a writer can profit from things that are maybe just unpleasant or boring to someone else because he uses those subsequently as materials for writing. And I would say that the experience that I had that’s described in Junky later led to my subsequent books like Naked Lunch, so I, I don’t regret it. Incidentally, the damage to health is minimal, no matter what the American Narcotics Department may say.

PG: Well the damage to..

WSB: The damage to health from addiction is minimal.

PG: But it has done things to your soul?

WSB: No, well, read one of the early authorities like (Thomas) De Quincey. For one thing, he would never have lived to be seventy-two unless he had taken opium, because he had tuberculosis, and, I think he would say the same as I say, that he didn’t regret his experience with drugs. 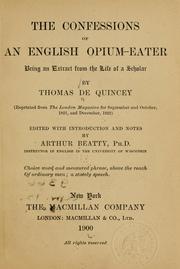 PG: Well you can say it and I will not argue whether the permenant damage to health is severe, but talk for a moment about being on the bottom, if you would, about what happens to.. why do junkies never bathe? (no, this is a serious question, not a.. there’s a physiological thing..)

WSB: I don’t know, they get like cats, they can’t stand water on the skin, for some reason or other.

PG: That’s one of the symptoms you went through?

WSB: Yes, one of the symptoms. They rarely bathe.

PG: What happens to your perception of reality?

WSB: Well, it always should be remembered that junk, or any kind of opiate, is a pain-killer and therefore it will lessen your perception of reality.

PG: What happens to your sexual appetite?

PG:What happens to your appetites for food?

PG: What happens to your ability to cope with day-to-day crises?

WSB: Nothing. Nothing whatever. Many, many.. see, I was.. I’ve been in England where addicts obtain their heroin quite legally through doctors (and many of them, many of the addicts were lawyers, doctors, bank-tellers, etcetera). So far as creative work goes, I say very definitely, counter-indicated, and I would never have been able to write Naked Lunch, for example, unless I had been off heroin.

PG: Are you, William Burroughs, still a junkie?

WSB: No. no, absolutely not . I  haven’t used.. been addicted to opiates for years.

PG: No, but an alcoholic who is not using alcohol will stand and say, “I am an alcoholic..”

WSB: He will indeed, yes

PG: “..and I’m still under that addiction”, and you say that, you imply that, through the book that addiction stays with you.. Are you not still addicted to heroin, simply not have used it for many many years

WSB: Er…that’s the question. It’s not exactly the same problem as..as alcohol, as you know, an alcoholic can.. he can’t drink a glass of beer, but if an addict goes to the hospital, say for an operation, (and) he takes the normal amount of medication that would be administered, he doesn’t necessarily become re-addicted.

PG: Then, if what you’re saying is true, explain this quotation – “Junk causes permanent cellular alteration. Once a junkie, always a junkie. You can stop using junk but you’re never off after the first habit.” That’s William Burroughs in Junky‘

PG: You do feel yourself permenantly cured? 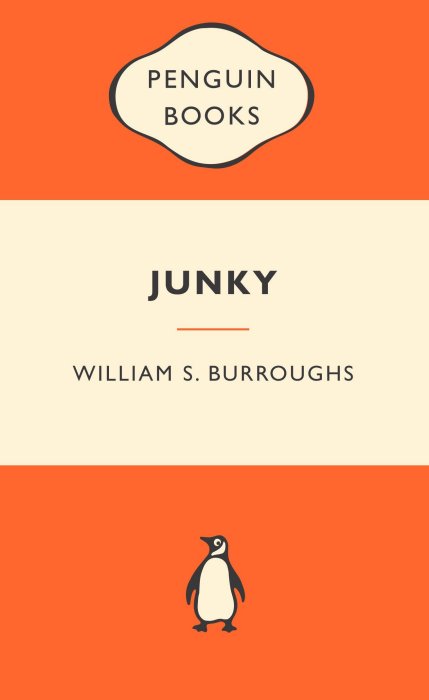 Listen to Burroughs reading from Junky/Junkie (in its entirety)  here.