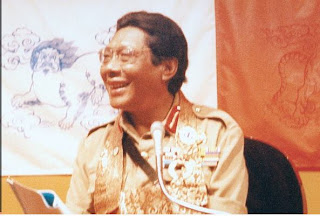 Chogyam Trungpa would have been 75 years old today

Here’s, on the occasion of his birthday, footage of Trungpa, from 1975 – Surrendering Your Aggression

more video (and audio) lectures are available here on the Chronicles site.

Carolyn Rose Gimian also collaborated with Diana J Mukpo (Trungpa’s wife – they married when she was a mere sixteen) on her revealing, candid and intimate memoir, Dragon Thunder. In other news Barry Miles’ Call Me Burroughs  biography continues to get an enthusiastic reception. Ann Douglas declares it “authoritative”  in last Sunday’s New York Times– “Appropriately, this biography, as Miles is at pains to tell us, (she writes) “is..collaboration, resting on the monumental research (James) Grauerholz did for a biography he abandoned in 2010, and the extensive taped interviews  Ted Morgan conducted for Literary Outlaw, his pioneering 1988 biography. Miles himself knew Burroughs for many years, it was he who discovered the lost manuscripts of Queer (1985) and Interzone  (1989), and he has written a number of books on the Beat Generation, including a fine biography of Ginsberg and  an early study of Burroughs  Although he occasionally simplifies Burroughs’ story with superficial moralizing..his access and wealth of detail will make this the go-to biography for many years to come.”

Iain Sinclair‘ lecture on Burroughs,  “Ghosts of a Ghost – William Burroughs, Time surgery and the death of the image” (delivered in conjunction with the show of photography currently up in London at the Photographer’s Gallery, and following an introduction by John Sears, the show’s co-curator), may be viewed, in its entirety, here.

Did you all hear of these recently-discovered, previously-unknown, Sappho poems?