AG:…. how many (syllables in the) French alexandrine?

AG: Twelve. And if you write in eight, eleven, or twelve syllables, pretty soon you develop an automatic body ear for being able to do it. Among moderns, Kenneth Rexroth‘s longer works are done by syllables – you’ll see a long column of poetic lines and they’re all six or seven or eight syllables. A number of poets worked with that. So that was Marianne Moore‘s way.

H.D. – Hilda Doolittle was a lesbian and was very much influenced by Sappho and Greek poetry, and, as far as I understand, she attempted to reconstitute classical quantity and measure in her line by the vowel length. I don’t know her work so well, so I’d have to look that up to find samples.

William Carlos Williams abandoned all attempts to go back to the ancient world and to imitate earlier forms. And so what he did was listen to people talk around (him), hear the raw data going into his ear, hear the rhythms of speech as people spoke – dah duh dah dah duh dah, duh dah-dah duh – and began recognizing and appreciating the ordinary mind, so to speak, or ordinary mouth, rhythms of everyday speech – and that’s the nearest to some sort of Zen, or Buddhist, approach, which is to say, to take the elements of speech as he found (them) around him and recompose the intensest moments of it into a little machine, a little poem-machine. He would listen for samples of archetypal emotive idiomatic rhythm (archetypal, that is, repeatable – emotive, containing some kind of affect, affection, or anger, or feeling – idiomatic, what he heard his wife say, what he heard his patients say). And in his Collected Poems, you’ll find little poems called “Specimens”. He goes into a woman’s house, and the woman says (he’s a doctor, a pediatrician) and the poem ends, “Doctor I-I-I-I-I don’t think she’s breeeeethin’..” – B-R-E-E-E-T-H-E-N – ” He was trying to get that “breeth-en” -“I don’t think she’s breethen” – So he was listening for that kind of rhythmic piecework, and putting those pieces together, composing them into poems, or listening to himself. Like the famous,“I have eaten/the plums/that were in/the icebox/ and which/you were probably/saving/for breakfast/ Forgive me/they were delicious/so sweet/and so cold” – Just a note he left his wife, which he read in the morning and maybe decided that was perfect speech, perfect American speech, perfect poem.

AG: Do you have a late Williams, that would have.. Pictures from Brueghel ?

Student: Yes, that’s what I brought.

AG: Great, okay, that’s perfect. If you can pass it along.. 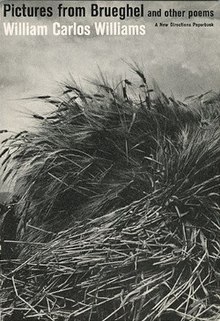 cover to New Directions paperback edition of “Pictures from Brueghel“

AG: Well, okay. Do you remember any Williams? Okay. I think it’s – I may be wrong – “The descent/beckons/as the ascent beckoned” (from Williams’ poem, “The Descent”) – Is that right?

AG (writing the line/three lines on the blackboard): “The descent…”  – you’re getting old…  I may wrong in dividing the line up.

AG: Well one is enough. “The descent” –  introduction of the idea – “beckons”  – so he’s stating the idea of the descent – “beckons/as the ascent beckoned” – So it’s three seperate idea pieces, three separate pieces of the idea, maybe spoken haltingly that way – “The descent/beckons/as the ascent beckoned” – So he would balance his line, perhaps, by idea, by balancing the idea of it out. That is, this you might count as one idea, two ideas. Idea one, two, three – think, number one, think, number two, think, number three – or three parts of one thought

Student: Is the word “even” in there? – “The descent/beckons/even as the ascent beckoned”

AG:  Maybe. Maybe – “The descent/beckons/even as the ascent beckoned” – Maybe – I don’t know. But for… yes?

Student: Perhaps, just in respect to breath, is it – or thought – is it..is there a relationship between the triadic foot and the haiku. I mean, just by accident.

AG: I don’t think he worked it out.

AG: No, I don’t think it’s that well worked out…

AG: ..because Williams’ practice.. was very varied. Williams’ practice was totally varied. There’s no single rule for why you break it up. Sometimes it’s breaking up the idea.. which would then  have a relation to haiku, sometimes breaking up the mouthing breath, sometimes it’s arbitrary, just to emphasize one word. Sometimes he’ll have a single wor likr “a” or “which” in the middle, and balancing two large wings of thought. So it’s by the seat of the pants. There isn’t any necessarily scientific shot. Williams is much criticized for bullshitting and saying he invented an American measure, and Reed Whittemore, former Library of Congress poet-in-residence and friend of the CIA ((who) wrote the testimony of James Angleton, the intellectual, CIA chief), wrote a book on Williams denouncing him, saying (that) he was a fool, (that) he didn’t know what he was doing, he was just coming on, trying to justify all his lousy prosody all his life, by saying  (that) he’d invented an American measure.  But most poets that follow Williams feel that it’s an enormous contribution 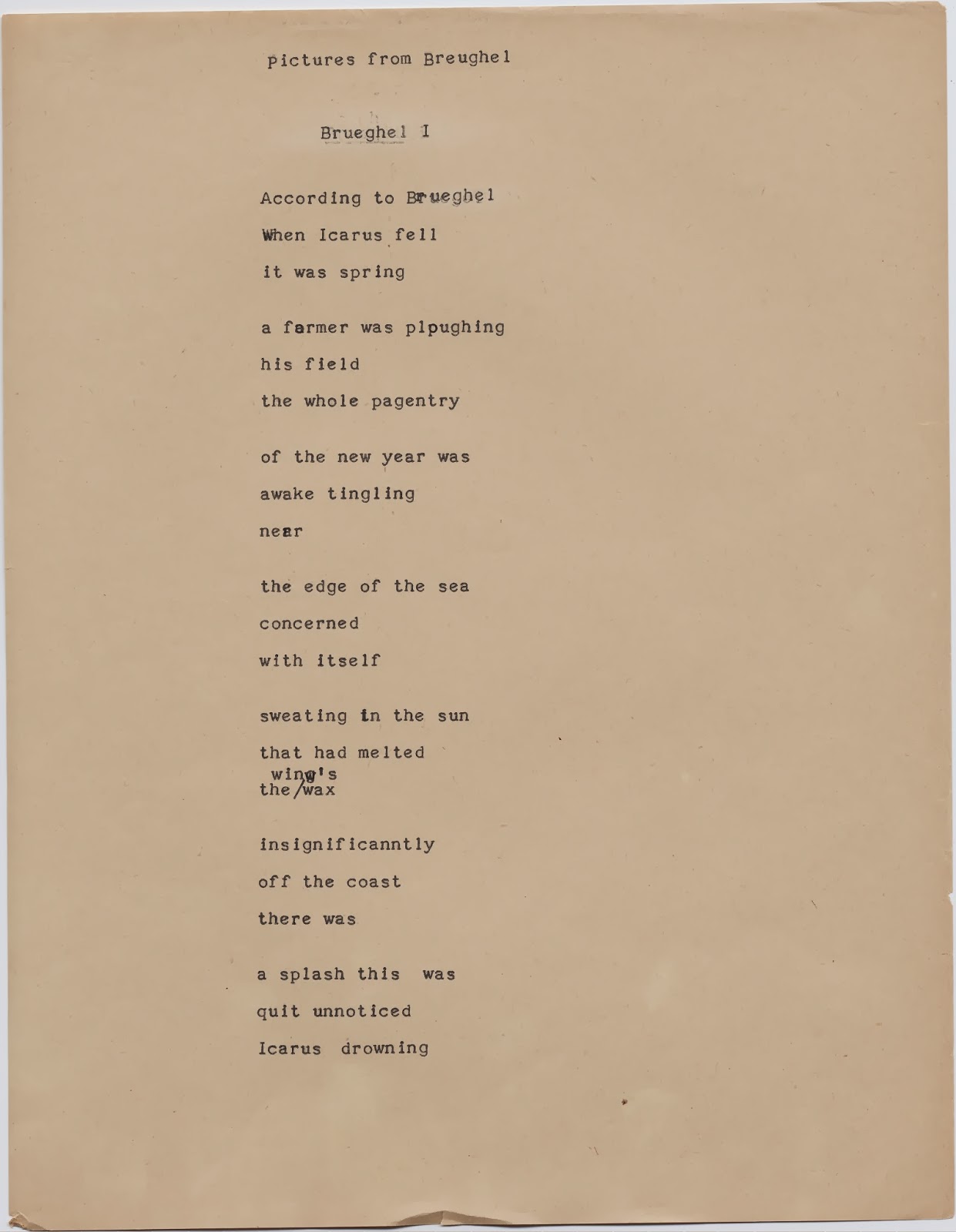 The key, however, is a relative measure – post-Einstein-ian – relative. It’s not a fixed arithmetical foot, like you’d count five syllables, or three long vowels, or three or four iambic feet – it’s relative. That is to say, according to your perception, according to the weight in your own ear, according to the seat of the pants – like flying by the  seat of the pants. But what it means, the real key, is something that Buddhists would appreciate – somewhat as in flower-arranging – it’s mindfulness and awareness in arranging the line. Not necessarily that the line be symmetrical or even, it’s just that when you arrange it you see what you’re doing when you’re doing it and you don’t just leave it slop on the page. So that every line, every one of those triads, is arranged as you might arrange a flower arrangemen, that is to say, with the same attitude of care, weight, weighing the sound one way or another, whether you’re weighing the idea, or weighing the sound, or counting the syllable, or combining all of those. I have a little essay on that called “Some Considerations of Mindful Arrangement of Lines on the Page in Free Verse”, at the end of a book called Composed on The Tongue, and that was passed out during the various (classes here). It was composed for one of the classes here. You might look that up. It’s all the different considerations that might go into this.    Let’s see.. Yeah?

Student: I wanted to ask you if you could shed any light on the influence of the Armory Show on (Ezra) Pound or (William Carlos) Williams.. What was…that about?

AG: Well, maybe.. but let’s get on..that’s a little later. That’s 1914 [Editorial note – actually, opening-night was February 17, 1913] and I’m still…I still want to stay on this line of not so much Surrealism or Armory Show, but I want to stay on “children of Whitman”, further Whitmanics.