Student: Did they (the early American modernists) manage to do it? (find a way of measuring American verse)?

AG: Yes, I think (William Carlos) Williams did. There were a number of people working on this problem at the time who were friends – William Carlos Williams, Ezra Pound, Hilda Doolittle, and Marianne Moore, altogether went to the same school [Editorial note – not exactly, Williams and Pound went to the University of Pennsylvania, Doolittle and Moore to near-by Bryn Mawr] and were friends and lovers, slept with each other, got drunk together, went out to dances, read poetry together. Willams (born 1883) was a little bit older than Pound, (born 1885),  Marianne Moore, I think, about the same age as Pound (1887, two years younger) and Hilda Doolittle (born 1886) maybe slightly younger. Hilda Doolittle is famous as an Imagist poet.

They all attempted to solve the problem of measure by different strategies. And among this group of poets – the avant-garde Imagist school, that was modernist, Imagist, Objectivist, you could call it, who received the influence of the international poets that we’ll been dealing with, like the Futurists and Surrealists and Dadaists who understood the sense of relativity of speech and morals and philosophy, and who had God swept out from under them, and all absolutes swept out from under them, and even patriotism, as you can see, after Whitman and Pound. After World War I and the destruction of all civilized values, there was no reference point in civilization that one could count on as a permanent value. The older measures – the stress – duh-dah duh-dah duh-dah duh-dah – had fallen into disrepute because (they) had finally come to pervert speech. So, by 1860, or (18)80, there was a poem, (by) Oliver Wendell Holmes I think [Editorial note – it was in fact by Henry Wadsworth Longfellow], “The Ship of State” (from”The Building of The Ship”, the final section – “The Republic”] (which was quoted, in 1945 by (England’s Prime Minister) Winston Churchill as sort of official poetic rhetoric, the kind of poetry a man could listen to).  And it was “Thou too sail on, O ship of state..” You know that poem?

AG: Does anybody know or ever hear of that? 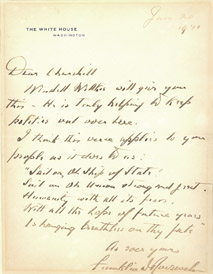 AG: Well, maybe I’ll bring it in. It’s in all the high school anthologies of the (19)20’s – (And) it has the line – “Thou too sail on, O ship of state” – And it’s considered to be (a perfect example of) iambic pentameter.
[Allen moves to the blackboard] – There doesn’t seem to be an eraser here. Can we make sure that there are (in the future)…in case we need…

Well, it’s the climactic line which Winston Churchill quoted – “Thou too sail on, O ship of state” – That’s how it was measured -“Thou too sail on, O ship of state” – Right?  You can all hear that?. However, if you notice, the exclamatory “O’ – Oh! – which is, if anything, an exclamation with stress, here receives no stress. So, finally, the poetic measure of America and England had become so reversed that it made absolutely no sense at all – that an exclamatory “O” was given an unstressed mark. So that can’t be any kind of measure at all because it runs counter to speech. They’d finally come to the point where the formal measure had actually begun contradicting speech cadences. So there was no way of using this anymore except by putting your emotions into some kind of box that it didn’t fit. Because, actually, I would say, ” THOU too SAIL ON O ship of STATE”, (and) if you’re going to say “O”, you’re going to say “OH!” – “OH ship of state” – but the “OH! – ” would be bigger than anything else (or “SAIL” – probably “SAIL” and “OH!” would be equal) – “Thou too SAIL ON O ship of state” (So ” sail”, “O”, “ship” – or maybe the “state” too). But that’s just exactly weirded out. I mean, that’s weirding out, the way it’s set up there [Allen is referring to the iambic measure that he has inscribed upon the blackboard]

Peter Orlovsky: How did (Winston) Churchill say it?

AG: “Thou TOO sail ON o SHIP of STATE”  – It’s automatic… like robot cadences.
Yeah, I think in Fulton, Missouri, the “Iron Curtain” speech, I think, he did that. When he declared Cold War on Russia, he did it with that kind of cadence – in other words, a completely faked public language. [Editorial note – ‘the “Iron Curtain” speech” referred to here was delivered in Fulton, Missouri, on March 5, 1946. – in it, Churchill declared, “From Stettin in the Baltic to Trieste in the Adriatic, an iron curtain has descended across the Continent.”]

They all had to deal with this problem, that is to say – Pound, Moore, Williams, H.D.
They all solved it different ways.