AG: (Walt Whitman) – What sort of response did he get? This (Leaves of Grass, first edition) is 1855. What I would like to do now is jump ahead in time. (we might come back to Whitman, but we have (as base) his main statement of self as extendible).

Then there was Fernando Pessoa, who was born in Lisbon on June 13, 1888, and died in 1935, during the great world depression. In Lisbon, he read Walt Whitman, and, around World War I on a street in Lisbon had a sudden seizure of realization of Whitman’s prophecy and so wrote “Salutation to Walt Whitman” (Saudação a Walt Whitman), which is a poem I had never run into until about three years ago [1978], when I began thinking, who else wrote interesting expansive poetry?

There are three poems that I want to line up (with Walt Whitman’s)  “Song of Myself” -Pessoa’s “Salutation to Walt Whitman”, and then (Federico Garcia) Lorca’s “Ode to Walt Whitman” – three children of Whitman – Pessoa’s “Salutation to Walt Whitman” is 1915, Lorca’s would, I think, be in the early (19)30’s in New York City – and, simultaneous in New York City, early (19)30’s or late (19)20’s, would be Hart Crane‘s section of “The Bridge” that directly addresses Whitman. Well, they all learned empathy from Whitman so they were all able to imagine him as themselves and so address him directly.

Student: As he requested in that…

“Salutation to Walt Whitman” – And its taking this notion of the self stretching itself infinitely, like a great big egotist also, but willing to work with that. [Allen reads Fernando Pessoa’s “Saudação a Walt Whitman” (in the English translation by Edwin Honig) to his class, in its entirety] – “Infinite Portugal, June eleventh, nineteen hundred and fifteen…/ A-hoy-hoy-hoy-hoy!”” ..”Good-bye, bless you, live forever, O great bastard of Apollo,/Impotent and ardent lover of the nine muses and of the graces/ Cable-car from Olympus to us and from us to Olympus” [Editorial note: not Honig’s, but a full, on-going English translation of Pessoa’s “Saudação a Walt Whitman” may be read here]

Student: Who does that translation?

Student: How did he write the word “yawp” in the original?

Student: Can you spell his name for us?

AG: Yawping. That is interesting. It’s (in the) Portuguese. It was sort of (at) the top, I seem to remember. Does anybody know Portuguese? Can anybody read a little bit, a tiny bit, of Portugese here ? Nobody? – Desencadeio-me  – I burst loose

Student: To salute you

AG: – aos pinotes – “bounding” e aos urros, e aos guinchos, e aos berros G-U-I-N-C-H-O-S – “yawping”, translated as “yawping”, so that must have been.. maybe “squealing”? “guinchos”? but I don’t know Portuguese. – that must have been a little genius touch of Edwin Honig (who was around, Honig was a friend of (Kenneth) Rexroth) and (the) (19)30’s and (19)40’s writers).
This book is a very rare, interesting book, published (as) Selected Poems by Fernando Pessoa. This is what he looks like [Allen shows the class the cover of the book] – a little tiny moustache and eyeglasses (and there’s an actual photograph [see above] that looks almost  the same 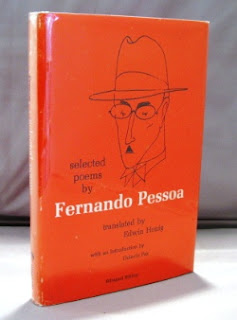