AG: …with (William) Wordsworth, we have a funny, odd, different adaptation. Wordsworth  [like (Walt) Whitman] also had a pantheistic vision of the universe. So I’ll just present one longish poem of Wordsworth as the equivalent of Leaves of Grass – Wordsworth’s younger and visionary (poetry) – 1798 – “Lines Composed a Few Miles above Tintern Abbey On revisiting the Banks of the Wye during A Tour, July 13, 1798”

How many here have read through Wordsworth? – Can you raise your hand? – And how many have not? – Raise your hand [significant show of hands] – Okay, so this is worth doing then, because it’s a great classic statement, which, if you’ve not heard it, is one of the major poems of the 19th Century – if not the (major poem), along with (Percy Bysshe) Shelley’s “Ode To The West Wind”, maybe, and (John) Keats’ “Ode on a Grecian Urn”. “Tintern Abbey” is the best statement of that 19th Century ego-ism that Whitman developed. 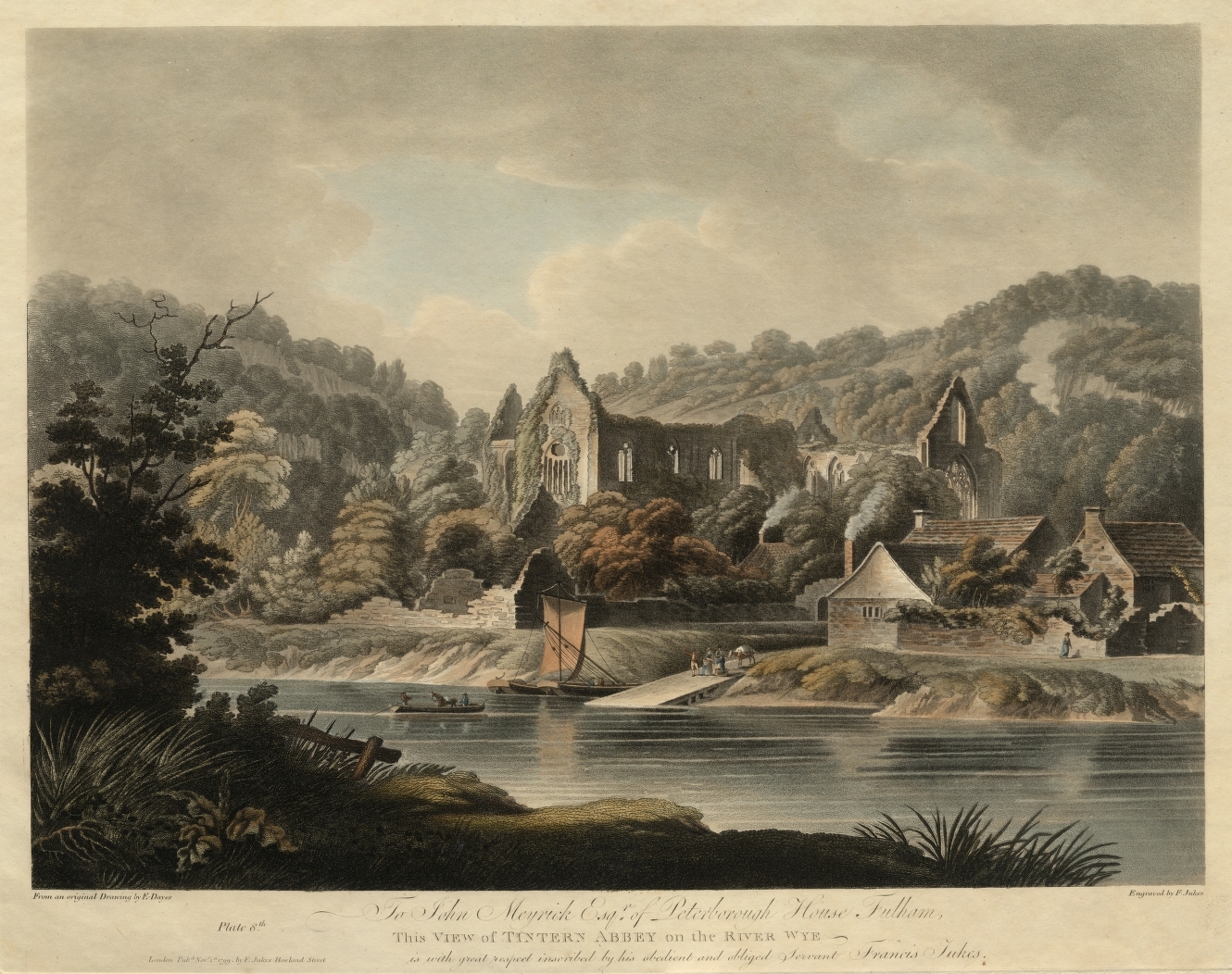 [Allen proceeds to read Wordsworth’s “Tintern Abbey” in its entirety] – Well, the presentation of pantheistic vision, (or, as they called it in those days, pantheistic) was that phrasing, which is sort of the bravura section in here – “A presence that disturbs me with the joy/Of elevated thoughts, a sense sublime/Of something far more deeply interfused,/ Whose dwelling is the light of setting suns/And the round ocean and the living air,/ And the blue sky, and in the mind of man:/A motion and a spirit, that impels/All thinking things, all objects of all thought,/And rolls through all things…” – It’s also a great generalization, because it’s so generalized, and, at the same time, precisely accurate to a natural outflow of feelings that we do have in great panoramic vistas. But, oddly, this poem is built on very precise imagistic details at the very beginning, like – “Once again I see/ These hedgerows, hardly hedgerows, little lines/Of sportive wood run wild, these pastoral farms/Green to the very door” – I always dug that because “Green to the very door” gives you (I think I’ve quoted that here before) a complete picture of the life and manners of those people that lived in that environment – that they stepped out of their doors very mindfully (so that the grass was still “green to the very door” – or they weren’t tearing it up with heavy boot-straps) – “(S)portive wood run wild..pastoral farms/Green to the very door” – that’s one of the best Shakespearean-like fact observations, (or) social fact observations that I’ve ever seen in poetry.

Philip Whalen: On the other hand, it must have been “green to the very door” because the farms had been enclosed by the landlord and the people had all gone away, and..

AG: No, No, actually, I’ve been in Wales, at any rate, not far from here, and cultivated farms are still “green to the very door”. It’s just something that is like an interweaving of mouths and minds and fields for centuries and centuries of awareness. He means it as “mindfully”. I was just pointing that out as, despite all the generalization of the poem, a very particular factual observation.

Well, so remember he said in here – “When these wild ecstasies shall be matured/Into a sober pleasure”. So, whatever happened to him in his “sober pleasure”?