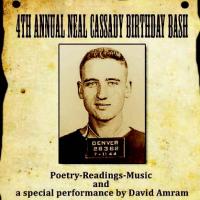 Today, February 8, is Neal Cassady‘s birthday. He would have been 87 today. See our illustrated and highly-annotated last-year’s post.

In a move that would no doubt have bemused Cassady, Denver Mayor, Mayor Michael Hancock made official proclamation of (a) “Neal Cassady Day”, and, last week, in honor of it, and of Neal, Denver Beat historian Mark Bliesner, hosted, (at the Mercury Cafe down on California Street), the (now 4th) annual “Neal Cassady Birthday Bash”.<

More mayoral intervention.
The late Mayor of New York, Ed Koch, was, it seems, a big Allen Ginsberg fan. Here’s an interesting document, (emerging from our office), an official letter he wrote, back in 1978 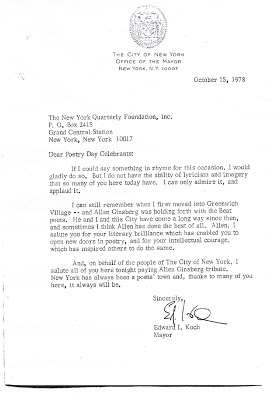 “Allen, I salute you for your literary brilliance which has enabled you to open new doors in poetry, and for your intellectual courage, which has inspired others to do the same”.

Next Thursday, at the Musee d’art et d’histoire du Judaisme in Paris, in celebration of a new French edition of the Journals 1952-1962 and the Indian Journals and a bilingual edition of the Poems, (and in anticipation of Jean-Jacques Lebel‘s upcoming touring exhibit, Allen Ginsberg and the Beat Generation), there will be a round-table discussion featuring Lebel, writer and director Alain Jaubert, and Beat scholar/Ginsberg biographer Barry Miles. Actor and theatrical director Arthur Nauzyciel will read and present a performance of Allen’s “Kaddish”.

Speaking of “Kaddish”, here’s another recitation of “Kaddish” (this time, in Italian), and back in 2006) – Roberto Biselli, (along with dancer Daniela Malusardi and Gabriele Mirabasi on clarinet) performs the piece at the Teatro di Sacco in Perugia.

Beat Memories – the show of Allen’s photographs currently up in New York, at the New York University’s Grey Gallery (until April 6), has inspired some intelligent response. Here’s Roslyn Bernstein in Guernica
Here’s Seth Rogovoy in the Jewish Daily Forward. Here’s Alana Shilling in The Brooklyn Rail.  Here’s Arielle Budick in The Financial Times [2018 update – now requiring a subscription].  Here’s the Huffington Post (with a slide-show!).

Kill Your Darlings – yes, we’re still going on about that! Here’s Michael C Hall (in, of all places, the Wall Street Journal (‘s blog) (we’ve noted this relationship before) – “I was lucky enough to meet (Allen) Ginsberg in the early ’90’s…I was in awe of him…He had a very sort of deliberate, grounded, hyper-articulate presence…I was right out of grad school in Henry V and he said “show me your lines”..I delivered one of them and he said, “Do you always deliver your lines in such a monotone voice?”. I said “Of course, not”. That was the end of the conversation”.

Peter Riley on Ed Dorn (the first part of which has been published here – second part forthcoming) is another essential piece of reading.

and for you Harry Smith-o-philes, here’s a two-part video interview (here and here) – Jonas Mekas‘ recollections of Harry Smith.