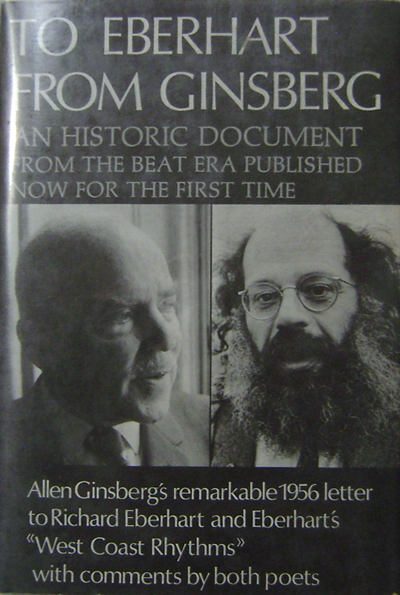 Seven years ago on this day, aged 101 (we kid you not!) the poet and teacher Richard Eberhart passed away. Not so much as poet but as reader and critic, Eberhart played a significant, one might even say critical, role in Allen Ginsberg’s life (and, most especially, in the dissemination of his long poem, “Howl”). One of the earliest of the establishment figures to seriously give credence to the literary achievement of the Beats, he was the author, in September 1956, of an important and influential article in the New York Times Book Review , “West Coast Rhythms”. “Ambiguity”, he noted, (in such poetry) “is despised, irony is considered weakness, the poem as a system of connotations is thrown out in favor of long-line denotative statements. Explicit cognition is enjoined. Rhyme is outlawed. Whitman is the only god worthy of emulation”.

Eberhart had met up with Ginsberg in San Francisco earlier that year and had been impressed with his poems. Kenneth Rexroth had alerted Allen that he would be writing an article. Flattered but concerned, Allen wrote him, prior to publication, an epic 34-page letter (his concern was with an apparent misperception on Eberhart’s part – “You heard or saw “Howl” as a negative howl of protest”, he (Allen) writes, “The title notwithstanding, the poem itself is an act of sympathy, not (of) rejection”).

The “remarkable” (indeed) correspondence was published by Michael McCurdy‘s Penmaen Press, in 1976, in a handsome edition (with Allen’s letter, Eberhart’s review, further notes by Allen. and relief etchings by Jerome Kaplan).

“What seems formless tho’ effective is really effective through discovery or realization of rules and meanings of forms and experiments in them,” Allen writes. The “form” of the poem is an experiment. Experiment with uses of the catalogue, the ellipse, the long line, the litany, repetition, etc, The latter parts of the first section set forth a “formal” esthetic derived in part incidentally from my master who is (Paul) Cezanne.The poem is actually built like a brick shithouse.”

“This [see below] is the general ground plan [of “Howl”] – all an accident, organic, but quite symmetrically surprising. It grew (part III) out of a desire to build up rhythm using a fixed base to respond to and elongating the response, still, however, containing it within the elastic of one breath or one big streak of thought.” 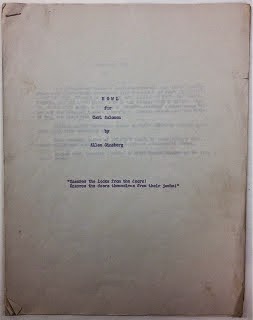 A report on the Rauner Special Collections Library (Dartmouth College)’s copy of the early mimeo edition of “Howl” that was sent to Eberhart, alongside the letter, in ’56, may be read here.