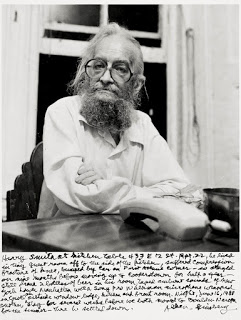 “Harry Smith at kitchen table. 437 East 12th Street. Apt 22, he lived in tiny guest room off to the side of the kitchen, suffered compression fracture of knee, bumped by car on First Avenue corner, so stayed on nine months before moving up to Cooperstown for half a year – still drank two bottles of beer in his room, taped ambient sounds on New York Lower Manhattan with a Sony Pro-Walkman microphone wrapped in towel on outside window ledge, kitchen and front room. Night, June 16, 1988, another stay for several weeks before we both moved to Boulder – Naropa for the summer. There he settled down.” (Ginsberg caption c. Allen Ginsberg Estate

Positively Unreasonable (sic) – the life and work of Harry Smith was recently saluted in Portland, Oregon.

For a fairly comprehensive list of multifarious Harry Smith’s links, we’ll send you to our posting on the occasion of his birthday last year

Allen took a whole slew of pictures of Harry, reasonable enough to call him, even for Allen, something of a photographer’s obsession, here are just a few of them. 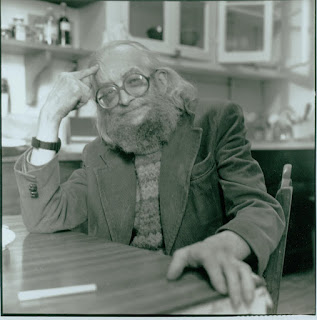 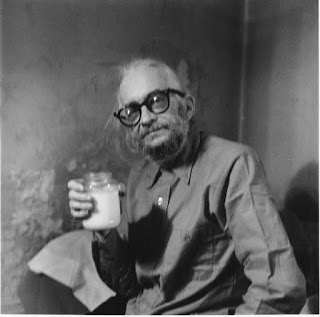 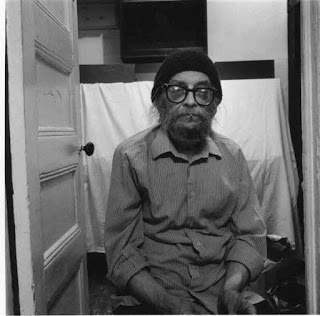 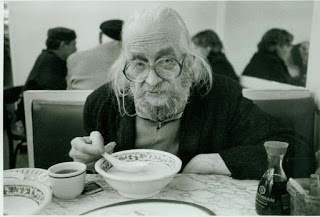