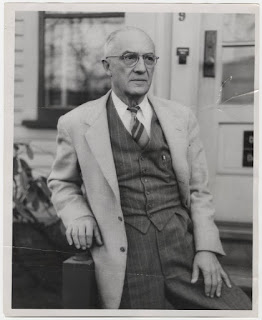 Portrait of William Carlos Williams in front of his office, 1950 via Beinecke Collection, Yale

AG: I think probably the breakthrough was, specifically, when people began recognizing what he (Williams) was doing, and began the contagion spread, and began actually acting on the instruction of his practice. (This was) probably 1948. And I say that, because, in 1948, he went out on a reading tour. He read at the Museum of Modern Art in New York (and I saw him read there, and first understood what he was doing, because before that, I hadn’t been able to read his poems, because I didn’t realize that he was just talking). The same year, he went to Reed College, and, while he was in Reed College, he met Gary Snyder and Philip Whalen and he gave a reading there (talked to them, but also gave a reading – and they heard his page aloud, for the first time). And that affected their practice. Same years, there was a thing called “The Berkeley Renaissance” (or “San Francisco Renaissance”) – 1948. That was like a very beautiful breakthrough of Gnostic mystical and local provincial Sierra-California self-awareness around Berkeley. Robert Duncan, the poet, and Jack Spicer, the poet, and Philip Lamantia, the poet, all members of an anarchist study circle, which included Brother Antoninus and..who else was around then?

AG: No..(I don’t think so). Gleason and Moore were of another, slightly other, group that had more.. were more.. from Stanford, I think. They were friends because they were all (of them) around in San Francisco and Berkeley. I think Madeline Gleason may have been part of that.

Student: How about James Broughton?

AG: Broughton was there. Friends with that. Kenneth Rexroth was the name I was looking for. (He) was sort of the center of that. It was during and after the war. During the war they got together. (Brother) Antoninus was a conscientious objector – (and) Philip Lamantia was a thirteen-year-old kid who was reading Rimbaud, and who, in 1944, had hitch-hiked to New York to meet all the Surrealists, like Andre Breton and others, who were in New York at that time, (having) fled from Europe during the war, and had founded a magazine called View. Lamantia, at thirteen, published a little Surrealist poem which had the refrain, “At the bottom of the lake, at the bottom of the lake” – writing in simple American Surrealism diction.

There was a fellow hanging around then also in Berkeley named Harry Smith, who, if any of you are familiar with film-making, was one of the originators of collage cut-up animated Pop Art cartoon, using Tantric and Gnostic symbolism, Aleister Crowley and Tibetan iconography. Smith was a kind of genius, who experimented with oils on plates projected through light-projectors onto screens, and was probably the originator of what later became the mixed-media light-shows that were in the Fillmore Ballroom and then spread out as a national style, with the understanding of cut-up and juxtaposition and simultaneity of apprehension. Smith left his equipment around when he went to New York in the 1950’s, and it was picked up by people there and developed (first) by.. Jordan Belson, and developed later, by the ’60’s, ’67, into the light-show. So Smith was hanging around there. Jack Spicer, another poet, was friends with a psychology student, named Timothy Leary, who was also there at the same time, hanging around in white shoes and white pants. So there was actually quite a scene going on, and it was called the “Berkeley Renaissance” at the time (Duncan, I think, probably the central figure as a poet, and Rexroth, the central father-figure. Rexroth was constantly in touch with Williams, and was the great Williams exponent at that time, (and) Duncan was having correspondence with Williams). Black Mountain College, an experimental community, somewhat like this was going on in..near Asheville, North Carolina, near Thomas Wolfe‘s home town. And that was a collection of very interesting people..that the sort of..patrons (of) were William Carlos Williams, Franz Kline, Willem de Kooning, and Bauhaus architects.[Editorial note – Allen is presumably referring here to Josef Albers] And there was a great deal of intercourse between Black Mountain and San Francisco – and Duncan and Creeley went to teach at Black Mountain – and then Creeley came to San Francisco a few years later, by the mid ‘(19)50’s.

So in the center, in Black Mountain, in Berkeley, in Reed College, Portland, in the North-west, and in New York, (19)48, (19)49, )19)50, Gregory (Corso) had read that little poem (of Williams) about “sweep under the bed/the baby is dead”, probably in jail, maybe.. late (19)40’s, early (19)50’s. By 1950 what is called “the New York School” of poets (Frank O’Hara, John Ashbery, Kenneth Koch..) had read and been influenced by Williams practice also, as well as Creeley and Duncan and Spicer on the West Coast. So I would say about 1948 there was a turn-around. And “when the mode of music changes, the walls of the city shake”. And so I put the crucial year of transition in consciousness in poetry about 1948, which means the beginning of a new consciousness of language, meaning a new consciousness of nation, of the ground, of the earth we were on, a new consciousness of what is straight talk and what is bullshit – noble changed to no bull (sic).

What? – (So) that was all in relation to something you asked..