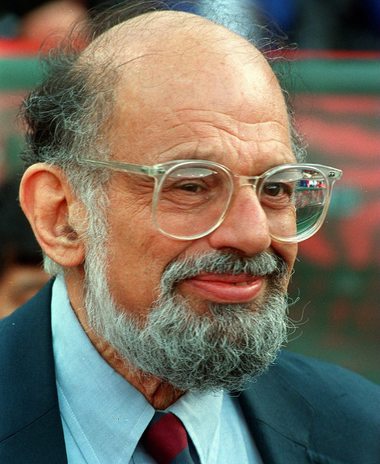 Wasn’t it just last year that we read this sentence (in the New York Times, of all places!): “Try to picture Allen Ginsberg having a chat with Don Draper, across the counter at the local coffee house, about the latest Lady Gaga video, and you’ll realize how far we’ve come.

Jake Marmer’s piece in Tablet magazine on octogenarian “Beat poet”, Herschel (Hersch) Silverman, is a gem and well worth reading – “Candystore emperor”, as Allen described him, “dreaming of telling the Truth, but his Karma is selling jellybeans and being kind”.

Another worthwhile read – Iain Sinclair‘s review of a new biography of another “fragile soul” who, during his lifetime, during his later years, drifted into Allen’s satellite, the great English Surrealist, David Gascoyne.

Nicole Henares reviews “The Language of Bebop.. in Allen’s “Howl””.

Daniel Radcliffe in People magazine, the first official promo and on-set interview for Kill Your Darlings – People: “Are you a Ginsberg fan?” – Daniel: “The more I learned, the more I liked him. There’s unbelievable sweetness and compassion between him and Burroughs and Kerouac. His work was like an explosion”.

Alan Govenar’s Beat Hotel continues with an extended play at New York’s Cinema Village – and, likewise, the exhibit of Harold Chapman photos at the OMC Gallery

&, we’ve mentioned before Pejk Malinovski “Passing Stranger” project, but just in case you missed it, here’s word on it again.