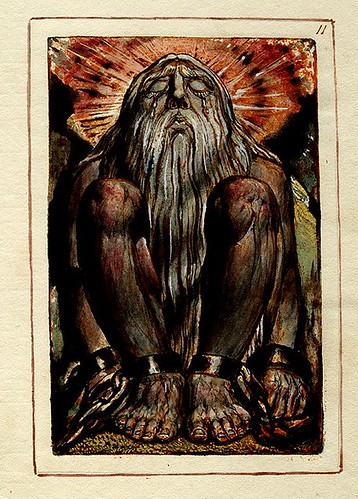 We’ve been serializing it here on The Allen Ginsberg Project this past couple of weeks. See, for example, here and here.

Side B of the tape begins in media res

AG: … so that he says up there, “The senses inward rushed shrinking”, that’s the same, page 81 [The Book of Urizen, Chapter IX] – So that’s that whole point I was trying to make about the eyes here. Now that’s Urizen himself he’s talking about because Urizen is symbolized by an eye. Then, now here’s the creation of the Imagination next – the ears – “The pangs of hope began..” [The Book of Urizen, Chapter IV] – Isn’t that amazing? The eyes began with fear, the heart began with fright and burning, eyeballs begin with fear and harrowing fear, the ears with “pangs of hope” – “In heavy pain, striving, struggling./ Two ears in close volutions/ From beneath his orbs of vision/ Shot spring out and petrified/ As they grew. And a fourth age passed,/ And a state of dismal woe.” – So, so far in building this giant, our own… actually, this is a description of our own thing from, what? (a) fetus? – the spine writhed in dukkha, or torment, or pain (with the immediate form of the spine, you usually get pain, from the birth of form. So, next, after that, Luvah (Emotion) is born – “Two nostrils bent down to the deep./ And a fifth age passed over,/ And a state of dismal woe” – So that’s the fifth age. The sixth age will be the entire body, but mainly the stomach, being born. And what I’ll do, as soon as I’ve done with this, is correlate with skandhas again – in other words, this cycle of the appearance of the senses up to the body, the seven, there’s a correlation with the seven days of Genesis, there’s a correlation (with) a cycle of birth, from spine form, all the way up to eyeballs, ears – and then I’m going to go back over these same stanzas and check them back to the same scheme we just ran through of skandhas, which is a little complicated, but it’s interesting for those who are (Buddhists). For those who are not Buddhists, is this boring? They’re still somewhat into it, okay, okay. So we’ve got the stomach – “In ghastly torment sick,/ Within his ribs bloated round..” – this is Rudra or Urizen (Your Reason). Rudra, which we’ve correlated already – “In ghastly torment sick,/ Within his ribs bloated round/ A craving hungry cavern” – the stomach – “Thence arose his channelled throat,/ And like a red flame a tongue/ Of thirst and of hunger appeared” – So that’s like.. remember when Thel [in the Book of Thel] was saying, “Why a tongue impressed with honey with every wind?” – “..a tongue/ Of thirst and of hunger appeared”. So with the appearance of the tongue, also comes thirst and hunger – “And a sixth age passed over/ And a state of dismal woe./ Enraged and stifled with torment/ He threw his right arm to the north,/ His left arm to the south.” – the birth of limbs and space here – “Shooting out in anguish deep; / And his feet stamped the nether abyss/ In trembling and howling and dismay./And a seventh age passed over,/ And a state of dismal woe” – And that’s the completion of the Imagination’s (Los’) creation of Urizen, the rational, the independent Reason’s body, the creation of the fabric of hallucination that appears to be the material world, the creation of the human body.

So far we’ve followed that, right? – Okay, now I’m going to go back on this particular cycle – so it’ll be seven stages – and correlate them with the skandhas – if we can. So I would say form begins with, “A vast spine writhed in torment/ Upon the winds, shooting pained/ Ribs, like a bending cavern,/ And bones of solidness froze/ Over all his nerves of joy. And a first age passed over..” – So I would say that would be the appearance of form and the first day of creation – sort of. Then, feeling – “From the caverns of his jointed spine/ Down sunk with fright a red/ Round globe hot-burning deep,/ Deep down into the abyss -/ Panting, conglobing, trembling/ Shooting out ten thousand branches.” – If the second skadha is feeling, or reaching out for a texture of other shape outside to substantiate the notion of the independent first separation out from void, the heart would be maybe appropriate, that power. The third stage, when the nervous system arises, is the rising of the nervous system – the eyes, Imagination – would be that sense of discrimination, choosing between what you like and what you don’t like. The perception impulse discrimination would rise simultaneously with, maybe, the imagination – nervous system and eyeballs. So I would say that first, “In harrowing fear rolling round,/ His nervous brain shot branches/ Round the branches of his heart”. Then, the beginning of.. (I’m sorry, the discrimination would arise with the eyes, with Urizen, with Urizen, not with the Imagination – that discrimination, the choosing between yes/no, that would be (a) rational thing and that would rise with Urizen himself, and that would rise from the nervous system (symbolized by the eyes, which are also characteristic of Urizen. So I would say that choosing between”yes” and “no” (Aristotelian logic – a thing is either “A” or “Not-A”, or, “I want”/”I don’t want”), polarized thought, dualistic thought… Dualistic conception rises, then, with Urizen, in Verse VIII: – “In harrowing fear rolling round,/ His nervous brain shot branches/ Round the branches of his heart/ On high into two little orbs/ And fixed in two little caves/ Hiding carefully from the wind,/ His eyes beheld the deep” – Then, next – “The pangs of hope began/ In heavy pain, striving, struggling./ Two ears in close volutions/ From beneath his orbs of vision/ Shot spiring out and petrified/ As they grew..” – “(A)nd petrified/ As they grew”, I would say is conception habits, set beginnings. And that would continue with the nostrils and with the stomach. So the conception habits, the solidification into conception habits, would, I say, be verses IX, X and XI…

Student: It seems to me that there isn’t quite that exact (a) fit.

AG:There is not an exact fit. This is a total approximation.

AG: Well, actually, previously, there’s a few reversals (but) it really doesn’t make too much difference. You could interpret.. I was interpreting form as the spine..

AG: Feeling means contact. Reaching out for texture and sensation. So I was saying, “Shooting out ten thousand branches/ Around his solid bones”.

Then the third was the discrimination and that was fear. The beginning of fear and the eyes separating out, and Reason arising, through the eyes. So I was saying that was the beginning of choosing “yes” and “no” – but that’s very much an approximation. I mean, it’s only associated, it’s only associative. And then, if I was to divide the rest of these days of creation up, I would say the ears and nostrils and stomach correspond to the development of conception habits, or the fourth skandha – the sets, inclinations, repeated experiences.

And then finally, “Enraged and stifled with torment, /He threw his right arm to the north,/ His left arm to the south… And his feet stamped the nether abyss.” – That’s actually the birth of space and consciousness. So it’d be completed there. So that’s the schemata I figured, roughly. And it also.. as you know, as you may remember.. there is Urizen, born with the eyes, there is Los (Imagination), born with the ears (in IX), there is Luvah (Emotion), born with the nostrils, and there is Tharmas (Body), born with the craving hungry cavern and tongue. So all I’m doing is pointing out all the little correlations and correspondences within the verses to his own symbolic system and saying that there is somewhat (of) a universal notion of genesis involved, that Blake repeats in Urizen, similar to the skandha interpretations of the Buddhists. Not that Blake is giving a Buddhist interpretation, nor that the Buddhists are giving a Blakean Urizonic interpretation, merely that both are relying on observations of mental nature, and come to roughly the same cycle with some of the same imagery.

Student: Well, you were saying (talking about)…(the awakening of each of the senses) (might this be analagous to a drug experience?)

AG: Presumably, it would be, yes, that would be the cycle, from the first wakening of some kind of thought of separateness to the development of a full conception of consciousness.

Student: (And the reversals?)

AG: Oh yeah. Anybody who goes through (say, an) acid (trip), goes through this. In other words, any traumatic experience will (cause it to) recapitulate. I mean, (if) you go out on laughing gas [nitrous oxide], you’ll come back up through all these stages. Sure. Actually, if you go out on laughing gas, that’s a good way of studying it. As you anesthetize your consciousness – sense by sense – the last sense to go, by the way, is hearing – in a dentist’s chair. Your eyes’ll go out, everything else’ll go out, but the last thing you hear will be the bong of the bell, or the muzak, and then the universe will disappear, (and then), the first thing you hear when the universe comes back is the muzak.

Student: Do you happen to know the (Biblical, Old Testament) correspondences (from the Book of Genesis)?

Ah, heck! – I didn’t look that up, because I just took it for granted that everybody knew it, but.. (and) vaguely, everybody does – unconsciously. It would be interesting to see.. In every case of this cycle, the first thing that opens up is form, or some crack-out. “A shadow of horror is risen…/ Self-closed, all-repelling”. Another (occasion) he puts it is, “Sundering, darkening, thundering/ Rent away with a terrible crash” – that’s Chapter III – “Eternity rolled wide apart”. Another way he puts it – “Los, smitten with astonishment, Frightened at the hurtling bones”. (And yet) another way… (this is the first movement, the first age, always I’m repeating, through the different phases) – “A vast Spine writhed in torment/…shooting pained Ribs”. So it’s always, like, the first rib, or the first break-out, or… Like when you’ve been hit on the head, and you wake up, there’ll be one crack of light, and everything will collect around that.

I’m wondering what the first thing is in the Bible’s account. That’s the question. I’ve forgotten. Do you know? Well, okay.

Student: It was a separation – something about the water from the earth or..

AG: Maybe. He divided the firmament from the waters or something. I don’t know what the precise thing is.

Student: It’d be the light.

AG: Well, I don’t know. Let’s check (it out). Somebody look it up. Somebody who’s got a Bible around. If you’re living in a hotel, look it up in the Bible

[Opening four lines of the King James version of The Bible – “In the beginning God created the heaven and the earth./And the earth was without form, and void; and darkness was upon the face of the deep. And the Spirit of God moved upon the face of the waters/ And God said, Let there be light: and there was light./And God saw the light, that it was good: and God divided the light from the darkness.”]