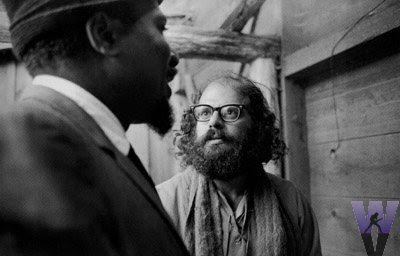 Allen Ginsberg with Thelonious Monk at Baroness Pannonica (“Nica”) Koenigswarter’s apartment, New York City, 1961 – Allen’s note on the back reads: “After playing at Five Spot (4 AM?) & Shooting-up. Tompkins Square East, at the Baroness’, a friend of hers, a lady” – Photographer unknown

Allen Ginsberg: Then in the early ’60s, Thelonious Monk spent maybe half a year at the Five Spot. I used to go as often as I could. He’d play four or five nights a week and I’d go.

Steve Silberman: I think that was after he wasn’t allowed to play because of the cabaret card problem and then once he got back in, he played a lot.

Allen Ginsberg; Yeah, he was great

from Bill Morgan’s I Celebrate Myself – The (Somewhat) Private Life of Allen Ginsberg:

“When Thelonious Monk performed for a few weeks, Allen listened to him almost every night after Peter left for work. On one night, Allen handed Monk a copy of Howl and Other Poems, then a week later asked him what he thought. Monk said he was almost finished with it but Allen continued to press him; “Well, what do you think?” – “It makes sense”, was Monk’s funny spur-of-the-moment answer, which delighted Allen so much that he repeated it countless times.’

Here‘s Monk performing “Blue Monk” in 1958
Here’s Monk performing “Hackensack” in England in 1965
Here‘s Monk in Scandinavia (a whole hour!) from 1966
And for those of you who’ve not seen it, see if you can track it down, Charlotte Zwerin’s 1988 documentary, Thelonious Monk: Straight No Chaser is absolutely essential viewing.Here’s a bizarre curio – Monk being reluctantly interviewed on French tv

Oh and did we mention Robin Kelley’s recent Thelonious Monk – The Life And Times of An American Original? We don’t believe we did.