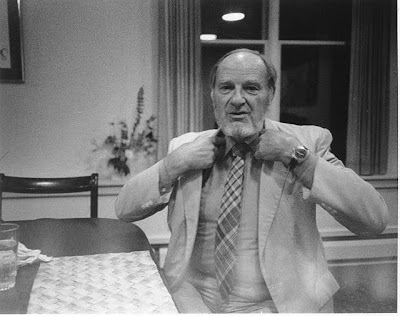 David Dellinger, at Karmê Chöling, Barnet, VT, where he and Allen had given a talk with David Rome and others, Labor Day weekend, 1984. Photo c. Allen Ginsberg Estate

Perhaps best remembered for his role as one of the defendants (the senior defendant) in the Chicago Conspiracy Trial, David Dellinger was an exemplary human being, a towering figure on the American Left over several decades, a Gandhi-like, life-time, radical pacifist, passionately committed to an activist struggle (through non-violent action) against all manifestations of war and oppression. As Noam Chomsky wrote: “Before reading (his autobiography, From Yale to Jail), I knew and greatly admired Dave Dellinger. Or so I thought. After reading his remarkable story, my admiration changed to something more like awe. There can be few people in the world who have crafted their lives into something truly inspiring. This autobiography introduces us to one of them”. In addition to his autobiography, mention should also be made of Andrew Hunt’s 2006 biography, David Dellinger – The Life and Times of A Nonviolent Revolutionary. Here’s Howard Zinn, Father Daniel Berrigan, Tom Hayden, Jeremy Scahill, Leonard Weinglass, Ralph DiGia and David McReynolds, memorializing him on Democracy Now! at the time of his death. Here’s Michael Carlson’s obituary in The Guardian,

Here’s the man himself in a 1982 interview, and again, the following year (for the Boston public television station, WGBH)

Dellinger participated in Allen’s memorial in 1998 in New York, at the Cathedral of St John, the Divine. Here’s a transcription of his remarks on that occasion:

Thank you Ed, it’s an honor to be here and an honor to be introduced by Ed Sanders, and the first thing I want to say is that Allen Ginsberg combined the personal and the political in a wonderful way. He did it in his life, in his poetry and in his action. And I think of one action, a very early one – and don’t ask me when, since I’m over 45, I can’t remember dates and things like that, but anyway – one of the first times Allen and I talked about an action was at the United Nations, or leading up to, the United Nations on Disarmament Week, and I asked him if we would walk with us (because we were marching first), and he said no, and so I walked with Pete Seeger and Arlo Guthrie and people like that – and I mentioned that Allen would be at the last place we were going to, the place we were heading towards, (and) they all said, “oh you have to have him to speak”, and so when we got there he was in his usual position, doing his “OM”’s ,and I said “Allen, everyone wants you to speak”, and he said, “no it’s much more important what I’m doing here”. So that was an example of the personal, but I also saw it in the farm that Peter Orlovsky and he had, and in just all kinds of places, and I remember one time when he and I and David Rome were speaking together at Karme Choling ,and they kept having us speak, so, after the third or fourth time, I said, “I think that it would be better if my wife spoke now”, and the woman in charge of the program said “oh no, you can’t do it that way”. And so I talked with Allen, and we set up a situation where my wife sat right in front of me and, after I said a few words , I said “oh and now I’d like to ask my wife”, and Allen thoroughly approved of it. But, also, in his honesty, he was never self-righteous or sectarian, and he even spoke a few times about the problems he was having with Chogyam Trungpa, and he told me that he was thinking about stopping the command that Trungpa had made – that he should do a hundred thousand prostrations. But he knew, in the end, he decided, that he got so much from Trungpa’s teachings that he would go and do the things that he didn’t even, in many ways, believe in, or (necessarily) want to do, Now I want to say, also, Allen was so smart that he came to me one time , when Abbie Hoffman had just come up from Mississippi, and he said, “you know I want to take you over and introduce you to Abbie Hoffman, because you two have so much in common” – and it was true! But let me tell you that a lot of the older, better-established peace organizations and their leaders didn’t approve of that, and one time in Central Park when we had finished all the announced speakers and people still didn’t want to leave, I saw Abbie, right down in front, and I said, “Abbie I want you to speak”, and he did and to me he was wonderful – but then someone made the suggestion that I should be removed as Chair for the Mobilization Committee to End the War because I had used this smart young kid, who had a sense of humor. Well, Allen had a sense of humor too, and he also understood that everybody couldn’t be the same, everybody had to be true to his (or her) own personality (which didn’t mean he didn’t exchange ideas, but he never did it in a self-righteous manner). Now I will conclude by saying that in this same cathedral (St John The Divine), I and Allen Ginsberg, (amongst many others), took part in the ceremony after Bill Kunstler’s death – and I was up in that one (points to one part of the cathedral) and he was up in another (points to another] so we had to sit on opposite sides, but afterwards he came down and he crossed over to where I was sitting and we took in the rest (of the program) together. And it was that time that he told me that he did not have long to live – and it hit me, you know, Kunstler’s death, and now Allen’s, so you put them together, and it was really quite a transforming, emotional experience. But after that, I did see him a few times when he spoke at a college, or when he read his poetry, and I was amazed at how well he did, considering he knew that he only had a short time to live. So I’m so glad that we’re all here to honor and praise Allen Ginsberg who was such a wonderful example for all of us including me, thank you

To conclude with a poem/testament by Dellinger