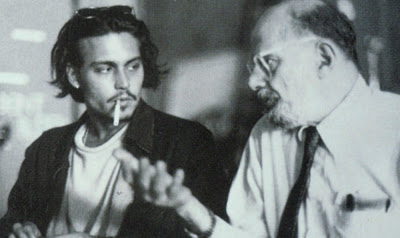 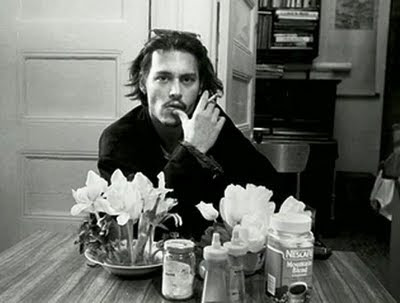 Johnny Depp’s interview with Allen appeared first in June 1994’s Interview magazine. His 1999 essay, “Kerouac, Ginsberg, the Beats and Other Bastards Who Ruined My Life” first appeared in Rolling Stone, July 1999. His memories of Allen (part of the Jerry Aronson DVD set) are recorded here in Los Angeles in 2003 [2012 update – regrettably, this video is no longer available on You Tube. We have, however, preserved the transcript]< Here follows a transcription: I was first introduced to Allen Ginsberg’s work by my brother, my older brother, who, from as far back as I can remember, was always a writer and went nowhere without at least three or four books in his hands I was very young. I remember he turned me onto Kerouac, On The Road, at a very young age, and, I remember him reading sections of “Howl” to me when I was about seven! I finally, physically, met up with Allen, which was a dream come true really. First, it was on the telephone. I met him on the telephone. It was something for, I think, Interview magazine, and it was like just a phone conversation between Allen and myself, and it was, like, you know.. It was amazing. You’re. talking to… Walt Whitman is on the phone!

And then I went to New York at one point, to do this film with Mark Pellington. I was just going to read some Kerouac stuff for “theUnited States of Poetry”..

(and) I was in the box, you know, and they were shooting me reading, and I was reading (Kerouac’s) “211th Chorus” (from Mexico City Blues), and, yeah, and out of the corner of my eye, there was this figure, and I knew right away it was Ginsberg, and we took a break, and, you know, we were introduced.

and then he started telling me how he would read the piece and then he was telling me how Jack (Kerouac) would have read the piece, and it didn’t take much for me to understand that he was trying to change the way that I was reading the piece, so I just kind of.. you know, here you are..you’re staring at this.. one of the most important poets of the twentieth century,or any time, and you’re faced with the situation of, like.. ”hey, I understand what you’re saying, and I respect you immensely, and I get it what you’re saying, but I’m not interpreting the piece as Jack or you, I’m reading it as me, so it’s kind of my deal at the moment – and it was one of the most difficult things I’ve ever had to say to anyone

and he was great about it. He was kind of, “Oh, I see, ok”, and I remember, all the while, I had a cigarette, and I lit it up, and, smoking a cigarette, I remembered his “don’t smoke” chant, (“Put Down Your Cigarette Rag”) and it was like “oh god!”, you know, stepping in shit, one foot after another, it was like (stepping in) a long pile of shit.

Then we went to his place and he asked me up for tea, (we) went up there and had a tea and we sat there and spoke about Kerouac and Burroughs and the early days which was, really, once again, you know, a dream come true.

And one of the kinder, sweeter, sort of more beautiful gestures.. He said.. We were in his kitchen, and he said, “You want to smoke, don’t you?” and I said, “Yes I do”, I was on the verge of nicotine seizure, . .He said “well, you can smoke, but you’ll have to sit by the window”, so I reversed sides and opened a window, and sat there and smoked, and he took a picture of me – he was great.

I gotta remember one night he called me, he was coming to California, to Los Angeles (he was doing a gig out here) and he called up, and he said, “let’s have dinner?”, and I said, “oh great”.. I went out and picked him up in Malibu (he was staying at someone’s house), picked him up, we got in the car, went and had this really nice dinner, had fun, talked about everything in the world, and then we got back in the car (a buddy of mine was driving, a friend of Allen’s was in the front, I was sitting in the back with Allen), and he reached over and took me by the hand, and just held my hand, for, like, I dunno, (an) hour-and-a-half? – we were just driving around, talking and stuff – and he just wanted to hold hands, you know, like the comfort of, I don’t know, holding someone’s hand, like a friend, or whatever. It was just such a beautiful gesture. From anyone else you’d go “whoa, whoa, hang on a minute now”, no no It wasn’t like that at all, it was.. he just wanted to hold hands, he just wanted comfort, he just wanted to feel another person’s pulse or something. It was amazing.

I got a phone call out here in LA ..because we’d talked before on the phone, (or something), before, and said – he’d said, “oh, I’ll either be coming.. I think I’ll be coming out to LA to do a gig out there, another gig out there, and (it) would be good to hook up and spend some time”, and I said, “great, yeah, wonderful, lets do it! ”

and then.. at a certain time, I got a phone call (that) said Allen called, “Ginsberg called, give him a ring back”. So I called him back (I think I called him back or did he..? – anyway, one way or another, we ended up on the phone together). And he said, “hey, I just want to let you know that I..I’m not going to be coming out to LA to do that gig, or whatever, do you think you’ll be coming to New York at all?” And I said, “not that I know of”, and he said, “oh that’s too bad”.. and I said, “well, what’s going on? ‘ and he said, “well, I just wanted to let you know that er..yeah, I’m dying” – “I’m sorry, huh? I’m sorry, excuse me?” – He said, ‘Yeah, I’m dying, you know”. I said “what,? what do you mean?”, He said, “I have this..this cancer..and.. and, you know, I’m not gonna make it” – And I was kind of.. at that point you know, you’re upside-down, you’re floating, you’re floating upside down, and I said, “how long do you have? and he said, “I have a couple of months”, a few months, or something, and I said, “I’m so sorry – whatever – but he sounded so calm, you know, When he was saying it all it was like he was saying “I can’t make it to LA, I got this other thing” – boom, nothing, you know. And I said to him, “you’re really.. you sound really peaceful about this, you know, this is all… you’re taking this very well, you sound very calm”, and he said, “oh yeah, he said, “it’s like a ripple on the sea of tranquility” – which was one of the more beautiful.. poetic, and, just a way of dealing, moving forward,.

And I was so honored to have had the opportunity to get to know him, to spend time with him, and, yeah, talk about stuff with him, and I was looking forward to many many more years and conversations, you know, nights out wandering, and, hell, even holding hands if he wanted to, just being with him – and then he went away. But.. from what I understand he was, and what I felt when I spoke to him, he was ready, and he was fine, and he’s probably up there giggling somewhere at all of us, probably saying “you have no idea!”. Yeah, he was an absolute diamond, and pure, pure, he was pure, not many people like that.