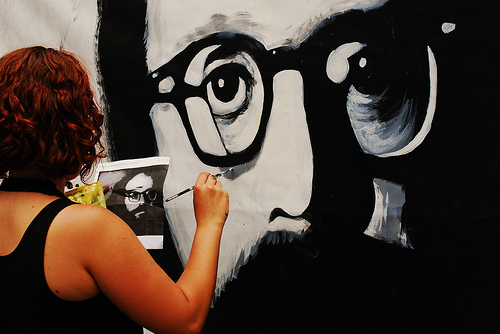 Rachel Geier at work at last weekend’s New York City Howl Festival – photo by Tim Schreier
So the Ginsberg 85th birthday celebrations last week were a great success. Yesterday we presented a portfolio of images from the New York City Howl Festival. Here‘s a short review by one who was there (and, in case you missed it, here‘s a report on the Atlanta, Georgia, Howl-a-thon)
Ginsberg encounters? – Here’s a sweet one, from Sam Roderick Roxas-Chua (aka Broi Yau) – and from the bowels of the country-blues world, “Mr O’Muck” (sic) recalls Allen chanting with a contingent of Tibetans outside the UN – likewise “Eric” (Eric who?) recalls him chanting in Washington DC (“Amongst tear gas..(and)..people trying to overturn buses…there was Ginsberg all by himself on a tiny dais, playing the harmonium and chanting Om”).
Ginsberg non-encounters? – Kris Needs, the compiler of a hugely-ambitious six-volume double- CD collection of New York music, Watch The Closing Doors (the first CD from which has just been released), recalls actually living in the same building as Allen for a while, but not really bothering him – “I lived upstairs from Allen Ginsberg and downstairs from Arthur Russell, and never tried to get beyond small talk on the stairs, even though the former was very friendly. History was happening in my building and I was more concerned with what was happening down on the corner!”
Speaking of history (how’s that for a segue?!), there can be no more historical Beat locus than City Lights, and, as part of their Pop Pilgrims series, the A.V.Club (hosted, on this occasion, by Brian Berrebbi) have just put out an illuminating video-travelogue – a visit to San Francisco and a visit to the bookstore. Events director, Peter Maravelis is interviewed and speaks eloquently about the history of the store – and, they even corral local hero, Daniel Handler (a.k.a. “Lemony Snicket”! ) into talking about his experience as a long-time appreciative City Lights customer.
Jack Kerouac, Jack Kerouac – did you read the story here about the “lost” Jack Kerouac painting? – and, according to one web report, December 10 is now scheduled release-date for the long-anticipated movie adaption of On The Road (a mere six months away!)
Ai Weiwei is still imprisoned. Here is an article surveying the continuing response from the international art world (and here is a profile of his friend, the documentarian Alison Klayman (from the Financial Times)).