We’ve had a few shots of Neal Cassady on the Ginsberg.org website (2010) for quite some time now with missing details and, in some cases, flat-out wrong information. Not quite sure how we’d had it wrong after all these years, and why Allen hadn’t kept more detailed info on that historic roll of film. At any rate, Charles Plymell took notice – and a good thing too, as he was there when they were shot, and in a few cases even took the photos himself with Allen’s camera. Here’s some fantastic detailed background to these historic shots from the Summer of 1963. 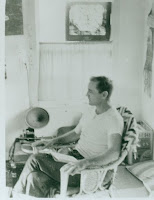 Neal Cassady sitting in chair at Karen Sexton’s house after arriving in Bolinas with Charles Plymell and Allen. According to Plymell, “Neal had spotted a copy of a Kerouac book and began reading his ‘parts’ to everyone.” Charles may have taken this one, as he’s thinking Allen had stepped outside while Neal was reading.” Summer 1963. c. Allen Ginsberg Estate. 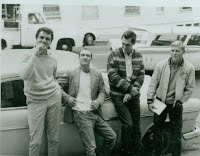 Neal Cassady outside Charles Plymell’s 1403 Gough Street house where Allen had met Peter 9 years earlier when Robert LaVigne lived there. According to Plymell, the other people in the photo were a “Hollywood filmmaker & cronies who came to Gough St. to visit.” c. Allen Ginsberg Estate 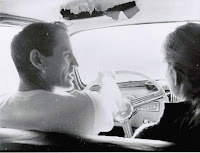 Neal Cassady and his girlfriend at the time Ann Murphy. Referring to this image, as well as another on that same roll which unfortunately we don’t have on hand, where Neal is looking toward the backseat, Charles Plymell writes:

“I thought for a while the famous headliner photo with Neal and Ann in front seat was mine, because Allen sat in the back behind Ann and the photo is almost in front with Neal turning completely around facing us. I know I told Allen to get the shot of headliner, or I would, but maybe he did. The car was a 39 Pontiac and Neal was speeding and Allen was telling him to slow down especially around curves where we were thrown into each other in back seat. Neal got mad at Allen telling him to slow down because it interfered with his arguing and slapping Ann when he had his hands free. He said the brakes were out anyway and speeded up using the hand brake and gear shift on floor to gear down on the steep hills while manhandling Ann in their eternal argument about who was fucking whom and scoring pills from her Dr. connection, so he sped up on purpose.” 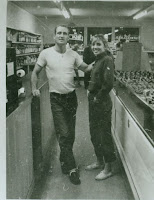 “When we stopped at a convenience store, I asked Allen to borrow his camera to take this shot as if nothing had happened and we went for a roller coaster ride. Neal was all smiles and otherwise had a nice time lying on the hills overlooking the shore at Bolinas. Allen was still in his Whitmanesque/India mode then.” Photo & Caption: Charles Plymell