Here’s for the holiday season our now-regular miscellaneous Ginsberg round-up, the last round-up for 2010

You all know Arthur Russell’s appearance playing cello on “Do The Meditation Rock from Nam June Paik’s Good Morning Mr. Orwell (1984) but here the two are again, Allen intoning this time on Arthur’s “Soon To Be Innocent Fun”, featuring John Moran with Allen Ginsberg, from the 1993 Meet The Locusts, produced by Philip Glass. Vocals are by John Moran, Joyce Bowden and Allen Ginsberg. Arrangement is by John Moran. Allen’s recorded voice also featured as “a patriarchal commentator named Justinius” in “Mathew in the School of Life, Moran’s 1995 science fiction techno opera”.

We’ve been meaning to get to this. Rodger Kamentz’s powerful verse essay, “Allen Ginsberg Forgives Ezra Pound on Behalf of the Jews” appeared recently in the Jewish Daily Forward. A verse essay, Kamentz explains is “a form that allows the exploration of ideas and associations as well as the use of documentary material” .The stepping off point of the poem was a 1992 interview. Read more of Kamentz’s introduction and the “essay” here. Here’s some more on Ginsberg and Pound (a 1967 poem from Allen that he dedicates to Pound) from the Winter 2008 issue of Flash Point magazine, and a photo taken by Ettore Sottsass. 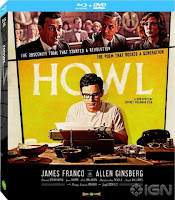 January 4 2011 is the date of the release of the DVD and the Blueray versions of Howl, the movie, not too long to go now. Oscilloscope have informed us that these new Howl releases will feature the following bonus materials:

January 4 also marks the date of the Harold Chapman Paris and the Beat Hotel sale at Bonham’s in London. A collection of Chapman’s prints titled “Peter Golding’s Harold Chapman Archive” is going up for sale. See our recent note on his last show this past summer at London’s Proud Galleries. The Archive consists of 108 photographs, approximately half of which were reproduced in Chapman’s 1984 The Beat Hotel book (which featured introductory texts by William S Burroughs and Brion Gysin – see also Harold Chapman, Beats A Paris: Und Die Dichter Der Beat Generation 1957-1963). A selection of prints are up for viewing now, and the entire set be viewed upon request.

A recent BBC film report on Chapman’s work can be found here.

Sean Wilentz, whose book on Bob Dylan, Bob Dylan in America,  is another, was recently interviewed in American Songwriter.com about the Dylan-Ginsberg link “The two of them had a profound impact on each other in terms of cultural imagery”, Wilentz declares, ”Dylan helped inspire some of his greater (sic) poems, including “Wichita Vortex Sutra.” Ginsberg helped legitimize Dylan’s lyric writing as serious poetry, and Dylan helped render Ginsberg into a kind of pop figure which he had not been before.”

On The Road Film

We told you last month that we’d keep you posted about the filming of On The Road You know the one where Tom Sturridge plays Carlo Marx/Allen Ginsberg? Well, shooting’s wrapped up, apparently. Here’s a photo-essay from our good friends in San Francisco at the Beat Museum. More to follow.