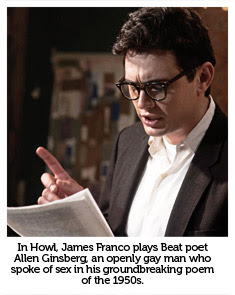 Rob Epstein: There were people who told us point blank you’re setting out to do the impossible. It can’t be done. And they may still feel that way after seeing the film but I guess that was the challenge that most excited us. To figure out ways to make this into cinema.

Jeffrey Friedman: The Ginsberg estate asked us to make a movie about this poem, and every development, as it metamorphosed from a documentary into the hybrid it became, they were completely supportive of and gave us great encouragement. And the fact Allen had collaborated with Eric Drooker as an illustrator said to us he was open to other people giving visual interpretation to his work.

Read the interview with Ferber in its entirety – here